In a masterful graphic novel, a photographer takes an empathic look at the victims of a natural disaster

It’s 1937 and the US has been brought to its knees by the Great Depression. Severe drought and overcultivation have caused the state of Oklahoma to be ravaged by sand and dust storms in a region known as the ‘Dust Bowl’. Many people move away; those who are left behind are destitute. A young photographer named John Clark from Washington, D.C. is sent to Oklahoma to capture the dire living conditions of the farmers.

Gradually John becomes more and more invested in their plight. He finds himself faced with a dilemma: he doesn’t just want to record what he sees; he also wants to help these people. He also begins to have doubts about the importance of his profession and the limits of photography. Because even though an image says more than a thousand words, he realizes a photographer can never convey the full picture. After his encounter with the charming Betty, he makes a decision that will change his life and his relationship to his profession forever.

In Days of Sand, Aimée de Jongh tells the moving story of a desolate region which falls prey to the destructive power of man and nature. It’s an urgent story that resonates with the current discourse about ecological and humanitarian disasters, and offers an answer to an important question: what role can artists play in addressing environmental crises?

De Jongh makes use of authentic photos and eyewitness accounts, but more than anything it’s the pages filled with sand and dust that viscerally convey just how lethal nature can be. In Days of Sand, the Dust Bowl – which previously inspired John Steinbeck’s Grapes of Wrath – becomes almost palpable. 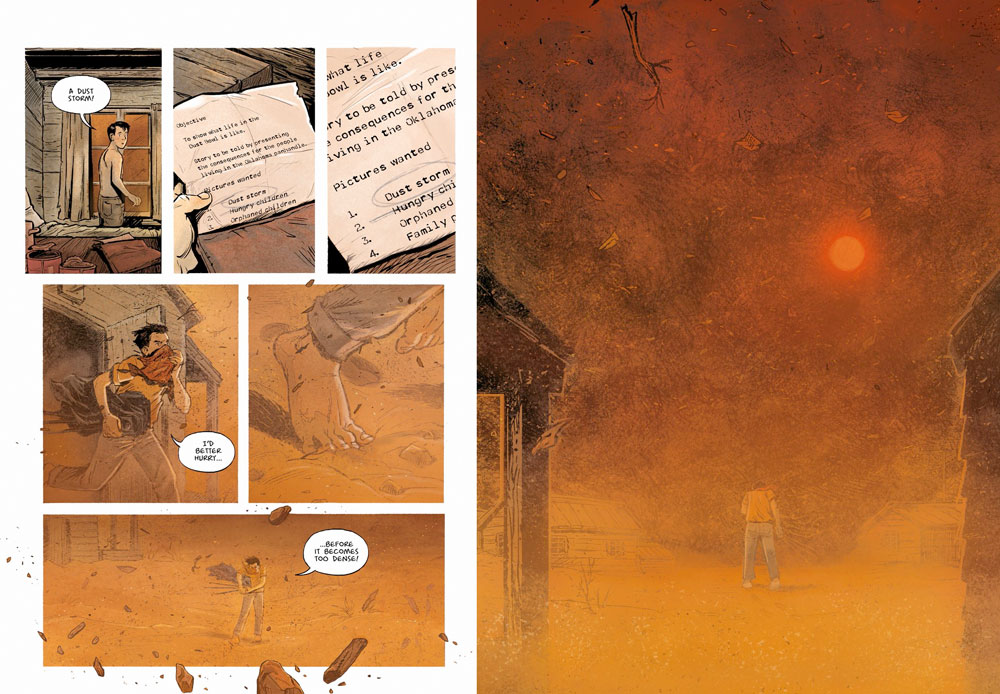 With Days of Sand, De Jongh cements her international reputation.

A touching story with real-life characters made vivid by De Jongh’s subtle and realistic drawings, which show mankind at its most noble.