The little boy Babu looks for signs from his grandmother, who has passed away. She told him that she would always be near to him, even after her death. Is Grandma in that cool breeze, in the river or in a tree?

Babu slowly realises that Grandma is everywhere and that ‘little pieces of the dearest face of all’ can be found in lots of places. As he moves through his grief, he can start to get on with his life, going to school and playing with his friends.

Always Nearby tells an evocative and tranquil story about bereavement, in which life slowly regains colour. Illustrator Mark Janssen took inspiration for this picture book from his trips to Nepal, as can be seen in his pictures of temples, souvenir shops and, above all, the expanses of nature. The pictures were made entirely with black pencil and are striking in their detail and subtlety. The variation in shades of grey creates an almost mystical atmosphere. Reviewers have described the illustrations as ‘fabulously beautiful’ and ‘staggeringly precise’.

It makes your mouth water 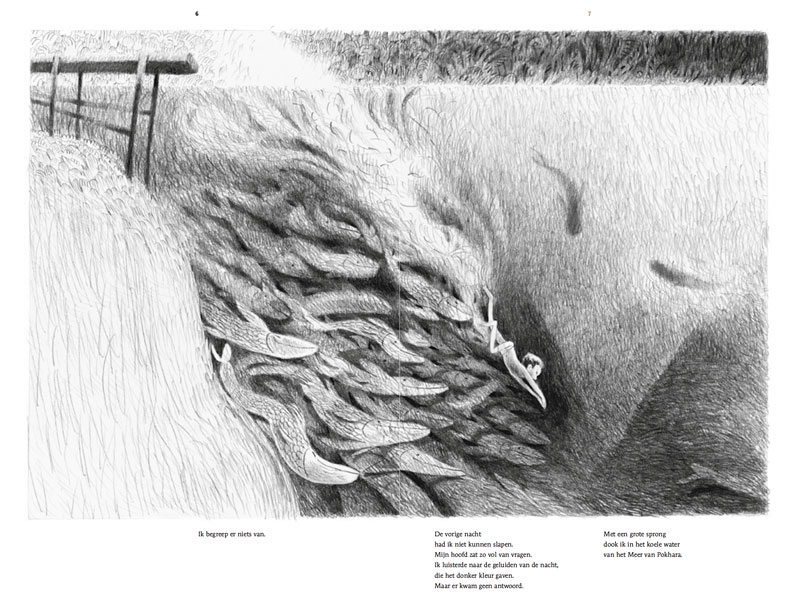 Mark Janssen (b. 1974) has illustrated around 450 books for Dutch, Belgian and Chinese publishers. In 2016, he created his own first picture book. Many of his books have already found their way abroad and have been translated into multiple languages.