For Frenk Meeuwsen, a drawing is like a Zen garden: wavy lines on snow-white paper. In those lines, he searches for the essence of Japan, for truth, and for himself. His book Zen Without a Master is visual philosophy.

Meeuwsen worked for three years on the graphic novel Zen Without a Master, in which he puts his search for spirituality down on paper in 55 brief chapters. Many of the experiences take place in Japan, where he draws sad girls’ eyes for an animation studio. He also regularly revisits his youth in the Netherlands, with his father as his first guru.

As the result of an eye defect, Meeuwsen has no depth perception and, as a storyteller, he makes repeated use of this irony to point out pitfalls in the way to the truth.

What is the sound of one hand clapping? Meeuwsen solves this famous puzzle of Zen philosophy quite simply: it “sounds” the way applause is depicted in sign language for the deaf. And, of course, he provides an illustration too, and this solution is also characteristic of his approach to spirituality, in which laughter is encouraged. Applying Dutch common sense, he takes on Japanese Buddhism, making some surprising discoveries along the way.

Zen Without a Master is drawn in crisp black and white, in the style of the French artist David B., who is one of Meeuwsen’s great role models. In Asian calligraphy, the black brushstroke on snow-white paper is an exercise in both concentration and gracefulness: the artist has to focus while letting go. In the Japanese Zen garden, the dark grooves in the white gravel create patterns for meditating monks to follow, in order to forget themselves. Meeuwsen also has a fine tale to tell about the black belt that he received as a karateka: if you often fight, the black wears off, until a white belt remains. The art of the paradox. 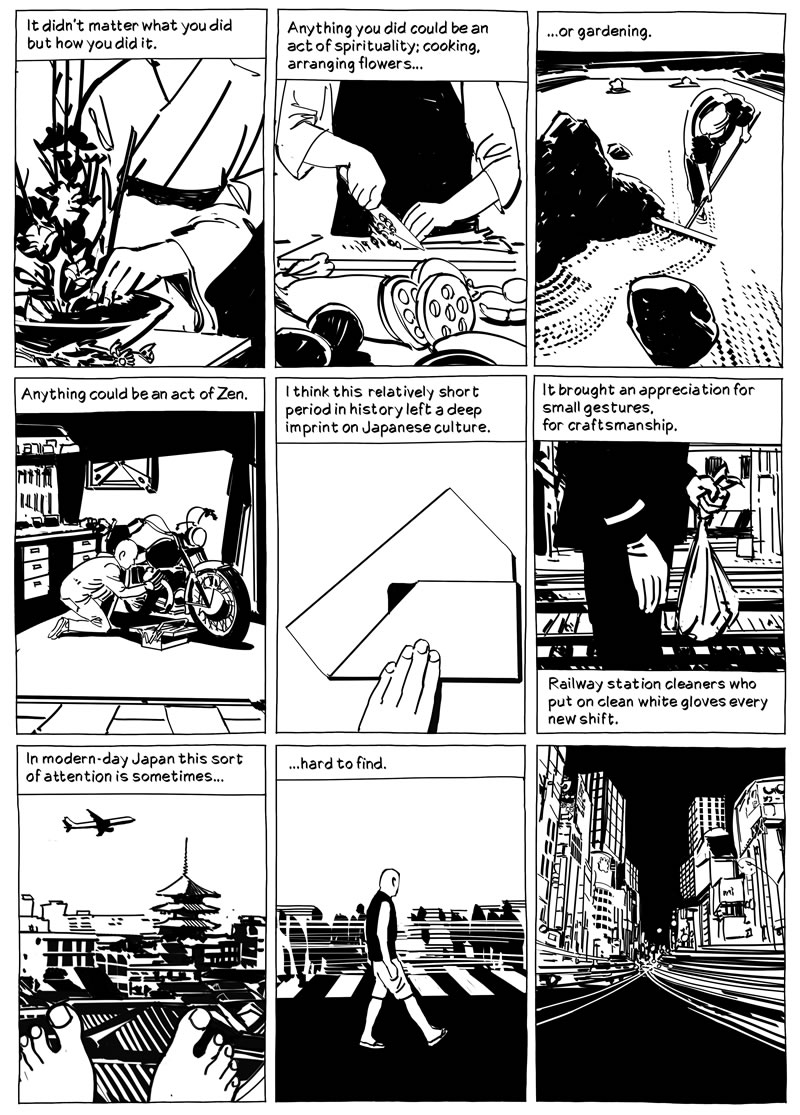 A surprisingly layered comic, which simultaneously informs, moves and prompts the reader to reflect upon life and its meaning. Highly recommended!