A melancholy masterpiece about old people and their failing business

Aart Taminiau does not make it easy for his readers. Wool presents a world that is on the brink of extinction. The protagonists are weary of life and they are no longer able to make any money. But just look at how ingeniously the artist depicts their situation!

The Van Mergaerts family from Tilburg, the centre of the 19th-century Dutch textile industry, have owned a profitable wool business for generations. They lead a life of luxury thanks to the fleece of the Scottish Blackface, a tough breed of sheep. But Progress does not stand still and they have to modernise. A ‘complete machine’ is installed in their factory, which noisily gives up the ghost on the very day of its festive commissioning. From that point on, everything goes downhill for the wool dynasty.

Aart Taminiau depicts this decline in dark drawings composed of fine hatching in a style that is reminiscent of Gustave Doré and his illustrations of the Bible, Dante and Cervantes. Just as in those engravings, the occasional ray of light falls into Wool, but it is not a light that brings illumination: the feeling of anxiety and claustrophobia prevails. To emphasise the weakness of the wool industry, Taminiau presents elderly characters who seem to disappear in the darkness.

A typical feature of Taminiau’s work is the use of parallel montage: he tells his story from multiple points of view, which are presented alongside one another on the page. On the left-hand page, for instance, we look from a theatre auditorium at a stage, while on the right we see the same scene from the wings. Wool plays with this narrative effect in all kinds of different ways. The characters may perhaps doze off, but the reader becomes wider and wider awake! 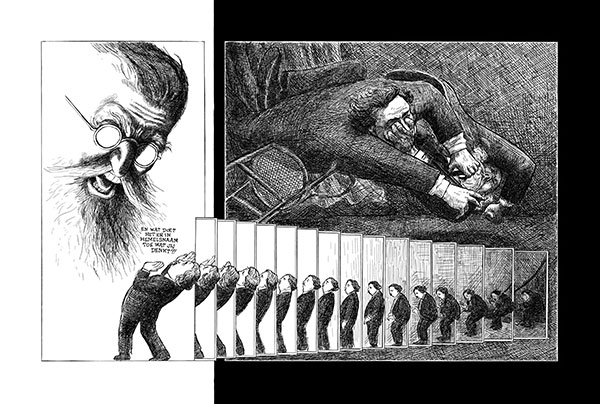 It is amazing how Aart Taminiau transcends the limits of the medium.

Aart Taminiau himself comes from such a textile clan and strikingly reflects the despair of this ineffectual family in the pleasingly self-assured Wool. The stately bourgeoisie of more than a century ago is also a good match for his drawing style: he uses intense hatching that is reminiscent of nineteenth-century engravings or of Edward Gorey, combined with studies of distinctive faces that could have come straight out of the sketchbook of an Expressionist such as Egon Schiele.

Aart Taminiau (b. 1982) is a filmmaker and comic creator. He has drawn stories for the Amsterdam comic magazines Wat Wil West and Oeverloos and in 2014 was one of the forces behind De kraker, de agent, de jurist en de stad (The Squatter, the Policeman, the Lawyer and the City), a journalistic…