In 2006 Hulsing moved to Cairo for five years. Inspired by his daily experiences in the turbulent Egyptian capital, he decided to transform dissident author Mohamed el-Bisatie’s novella Al-Khaldiya (Over the Bridge) into a graphic novel. As it happened, Hulsing’s Stad van klei (City of Clay) ended up being published at the beginning of the Arab Spring, a few days before the uprising in Tahrir Square began. One of its themes is police corruption and brutality in Egypt.

The story by El-Bisatie and Hulsing focuses on civil servant Salem, who invents the city of Khaldiya so that he can collect the salaries of an equally imaginary local police force. He produces fake documents and builds the city out of clay in his own home, as a realistic depiction of his own imaginings. He maximizes expense claims by inventing rebels that need to be kept under control by the police – by violent means, of course.

This twist lends the story a political charge and enables the storytellers, both writer and illustrator, to criticize police corruption. When the police are not bullying citizens, they are in the brothel. Hulsing says that this is a very relevant tale for our times: “The Tahrir Square uprising started after a guy was shot for taking photographs of police who were dealing drugs in Alexandria.”

City of Clay has been published in a number of languages, but not as yet in Arabic. Hulsing’s graphic novel adds much to the original and is painted in two colour palettes: cool browns for the parts of the story that are set in Cairo, in the real world of the protagonist, and warmer desert shades for the imaginary scenes in Khaldiya. Hulsing plays beautifully with this change in colours. The book ends with a hallucinatory scene: Salem, who has gone insane, is strangled by a police commissioner and buried beneath the desert sand. In the final image, the warm colour of the sand changes to the colour of the cool clay: fantasy has become reality, and Salem is suffocated by the figments of his own imagination. 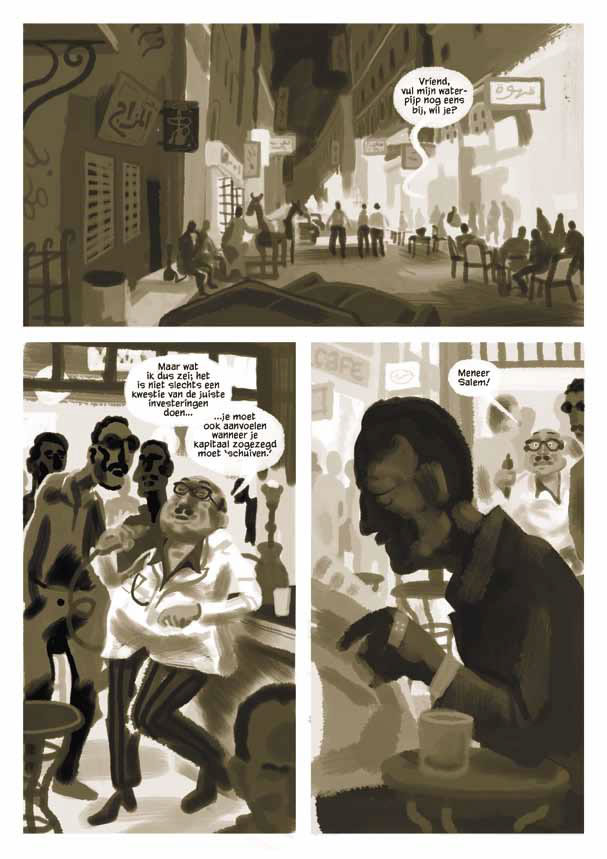 This is a brilliant graphic novel City of Clay: brooding, evocative, about the fictionalization of thoughtful and timeless, yet Egyptian society over the past reflective of modern times. Highly thirty years. The tone that Hulsing recommended! achieves in his text and images is amazing.

This is a brilliant graphic novel about the fictionalization of Egyptian society over the past thirty years. The tone that Hulsing achieves in his text and images is amazing. Read it in the bath!

Milan Hulsing (b. 1973) studied at the Willem de Kooning Academie in Rotterdam and then did film and theatre studies. His first comic strips appeared in the mid-1990s. In 1999, Ode aan Wilhelm (Ode to Wilhelm, written by Hulsing and illustrated by Michiel de Jong) was published, about a black…