Everyone knows at least one murder ballad. It’s a classic bluegrass or folk sub-genre halfway between fiction and reality, and deals with the great themes: crime, murder, betrayal, love. Every song is a story with a beginning, middle and end. And whether it is The Long Black Veil (made famous by The Band and Johnny Cash among others) or Where the Wild Roses Grow (Nick Cave and Kylie Minogue), the story behind the music is often just as poignant as the song itself.

Instead of giving us a literal rendition of the lyrics, Kriek went looking for the story behind the song. The result is a compelling collection of dark tales. This visual tour de force also comes with a CD with music from the Blue Grass Boogiemen, so that you can listen to the songs, some of them sung by the author himself (!). The book’s introduction is by Jan Donkers, an authority on American culture.

Erik Kriek’s distinctive style is one that lends itself richly to dark tales. He works in dramatic black ink; each story has its own distinctive background shade. With this new collection, brilliantly combining music and image, Kriek clinches his place as a master of the graphic novel. 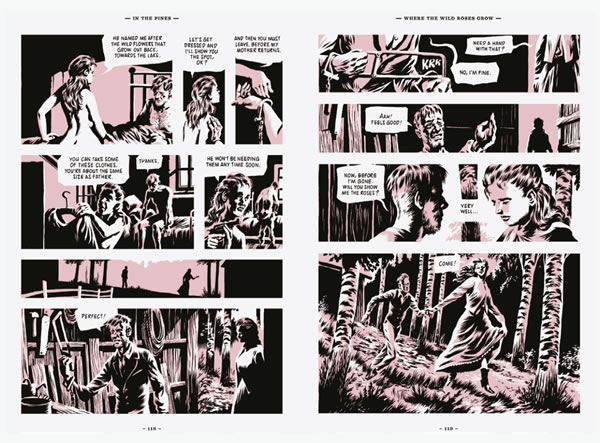 Pounding feet, terrified glances, a noose around someone’s neck: with dramatic close-ups and a cinematic approach, there is much to savour in Erik Kriek’s comic book, based on murder ballads.

A brilliant idea. Set, with apt affection for the Gothic mood, in the nineteenth-century American landscape.

The thing [Kriek] does so well is to allow landscape and setting to create the mood. Even when the sun is shining, it’s dark in the woods.

Erik Kriek (b. Amsterdam, 1966) is an illustrator and comic book artist. His illustrations have been published in The Boston Globe, Weltwoche, de Volkskrant, NRC Handelsblad, Vrij Nederland, Het Parool and the VPRO Gids. He is also a designer of record albums, posters and skate- boards. In 2008 he…