One reviewer referred to Enthoven’s breakthrough book as ‘slightly autistic’ and it is not hard to see why. With its very precise drawings, Binnenskamers (Behind Closed Doors) depicts a period in the life of artist Tim, who works, eats, goes to the loo, showers, sleeps and occasionally meets another person, preferably a girl.

The frames that fill a typical comic book are transformed here into glass rooms that float across the space of the page, capsules that allow curious passers by to peer in at Tim’s life. You might call that life lonely, but interviews with Tim Enthoven reveal that he enjoys long days of work best of all, when he can draw in isolation from early in the morning until late at night. The rigour that Enthoven imposes on himself also affects the design of his work.

Binnenskamers is a book in a large format with sturdy paper, in which Tim’s monastic existence is depicted in sharp black lines. He usually heads outside only to go to the Chinese takeaway and he has sex with a girl on one occasion, graciously shading her skin in pink. This relationship is not, however, cause for optimism: one of his drawings shows the girl devouring Tim, just as Saturn ate his son – an image that is familiar from the work of Francisco Goya.

Taking inspiration from the classics, rather than other comic strips, is a typical feature of Enthoven’s work. He finds his influences in great figures such as author Knut Hamsun, a master when it comes to describing loneliness, and Albrecht Dürer, for his graphic precision. What is most striking about this young comic-book creator is his originality. His autobiographical exhibition The Tiny Tim, the Early Years of Tim Enthoven 1994-2003 proved that he is able to create extraordinary narratives in three dimensions as well as on paper. Enthoven forced viewers onto their knees to look back with him at his younger self: in one of the black boxes he depicted a line of children holding up their arms so that you can pass underneath – just as Enthoven himself once did.

In Binnenskamers, Tim Enthoven has translated his memories of his own days as a student into a stunning graphic novel. Binnenskamers abandons all narrative conventions in a story about a disturbing and compelling urge for perfection.

The Netherlands has found its own self-possessed counterpart to the exuberant Belgian Brecht Evens. Tim Enthoven is a newcomer in his twenties with international potential and innovative imagery. 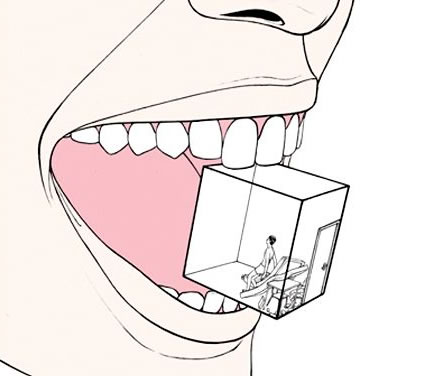 Tim Enthoven (b. 1985) graduated with honours from the prestigious Design Academy in Eindhoven, with the graphic novel Binnenskamers (Behind Closed Doors) as his final project. And ‘project’ is the right word for Binnenskamers, as this is more than just a book, having been exhibited during…