Hanco Kolk achieved his first successes with humorous comic strips, such as Gilles de Geus and Inspecteur Netjes. In the early 1990s, he decided to add a new dimension to his body of work that would offer opportunities for stylistic experimentation, social criticism and satire.

In the four-part Meccano, wealthy people serve as the staff of the very richest individuals in the world in a small principality on the Mediterranean. The decadent lifestyle of the protagonists is a theme that runs throughout the four parts of this series – Beauregard (1992), Gilette (1994), Schlager (1999) and De Ruwe Gids (The Rough Guide, 2007). The hypocrisy of the Church, tabloid journalism and philanthropy are depicted in sharply written plots. These albums may be unsuitable for the younger audience that Kolk previously won over, but in terms of form and content he has now succeeded in reaching adult readers too. He takes a very stylized approach to the line, dashing his characters onto the paper, and frequently experiments with colour.

Schlager, for example, which is set during the war in the former Yugoslavia, is finished throughout in various shades of blood as a metaphor of violence and hypocrisy.

In terms of ambition, artistry and depth, there is little in Dutch comics to match Kolk’s series about the decadent little city state of Meccano. 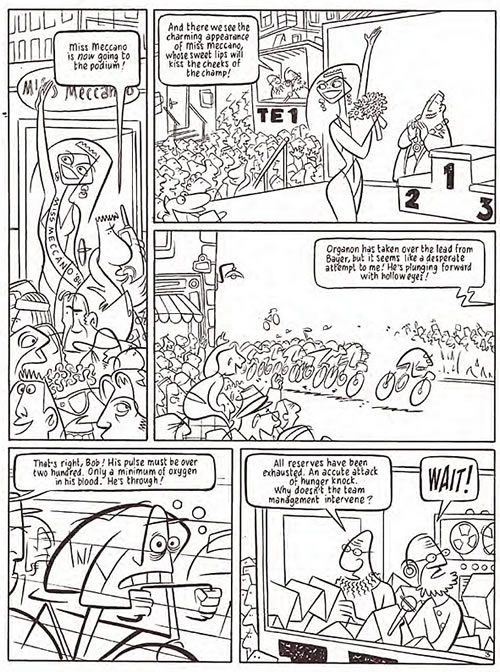 Hanco Kolk (b. 1957) has created a diverse body of work, achieving success in both mainstream comics and the graphic novel. His first comic strips appeared in underground magazines in the 1970s. He worked with Peter de Wit to produce the popular strip Gilles de Geus (published in English as Bryant…