Bijna compleet (Is that all there is?) is not an overview of Swarte’s oeuvre, even though that might be what the title suggests, but an anthology of the short humorous comic strips for which Joost Swarte became well known in the 1970s.

In this apparently ready-made world, nothing is what it seems; his heroes and anti-heroes stumble from obstacle to misunderstanding. A regular guy becomes entangled in a strange kidnapping case; a wealthy man’s shady past catches up with him; an inspector comes up against a series of mysterious suicides. Swarte ensures that the reader’s eye darts from pillar to post in order to unravel the plot.

In these stories, the crystal-clear design runs counter to the misleading plots. This is a frequent feature of Swarte’s work, as he is an inquisitive artist who loves to create constructions with hidden depths.

Swarte’s stories about Jopo de Pojo, Anton Makassar and Caesar Soda have been published in leading magazines all around the world. In the United States, they have appeared in Art Spiegelman and Françoise Mouly’s RAW; in France, in Charlie Hebdo and A Suivre; and in the Netherlands in the famous underground magazine Tante Leny Presenteert. Swarte’s style of drawing is based on Hergé’s, which Swarte dubbed ‘De Klare Lijn’ (*ligne claire, *or clear line): there is a lack of shading and hatching, so that the priority is on readability and clarity. This approach means that Swarte’s drawings fit seamlessly within the tradition of Dutch Design. In terms of subject matter, however, he is more closely related to Groucho Marx, who knew how to drive viewers crazy with the logic of the illogical.

Humour and intelligence are also closely intertwined in Swarte’s work: these are the building blocks that he uses to construct his oeuvre.

It is less surprising than it might at first seem that this comic-book creator, who belongs to the same rebellious generation as Robert Crumb, should become an architect. Construction and manipulation have always played

an important role in the creation of his comics, and it is this architectural tendency that led him from two dimensions to three. Swarte used to draw the popular Niet Zo, Maar Zo stories, in which he dreamed up ingenious situations that incorporated a sense of creativity and wicked glee. Nowadays, his wit takes on a more physical form in his architectural constructions.

I’ve loved Joost Swarte’s perfect cartoons, drawings and designs for decades and it’s nothing short of ridiculous that a comprehensive edition of this brilliant artist’s work has never been available in America until now.

He has a refined visual intelligence wedded to a sense of humour and history. He experiments within a tradition, and is always trying things that are so daring yet made so simply that by the time they are accomplished it looks so easy that it belies the courage involved. 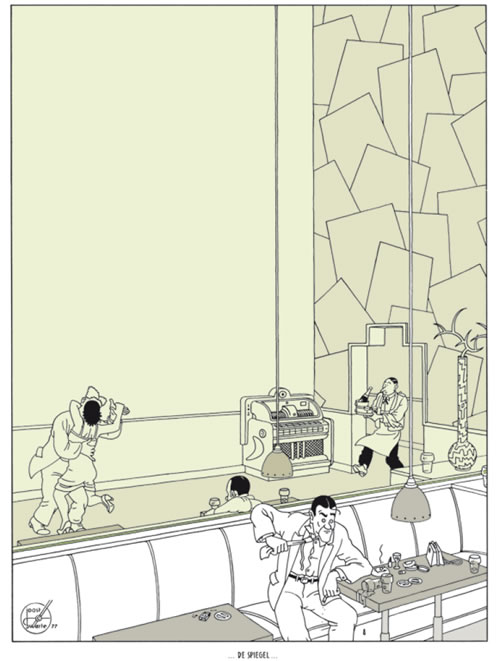 Joost Swarte (b. 1947) is an artist, designer and architect. He studied industrial design in Eindhoven and started his own comic magazine Modern Papier in 1971, which connected him to the international underground movement. L’art moderne was published in France in 1980, a collection of Swarte’s…