The Return of the Honey-Buzzard is a visual masterpiece of magic-realist tension. Its apparently sketchy yet precise style, its subject matter and its filmic narrative are reminiscent of Craig Thompson’s Blankets and Hayao Miyazaki’s Spirited Away.

Simon Antonisse, and his wife Laura, had reluctantly taken on his parents’ bookshop. Now that it is threatened with closure because of the financial crisis, he becomes increasingly self-absorbed. This is made worse by his witnessing a suicide in the woods on his way one day to the building where his books are stored. Unable to open up and share his experi­ences with others, he spends more and more time in the storeroom where he withdraws in his mind to his schooldays and his friend Ralph, who died while trying to take revenge on the bullies who were making his life a misery.

This repressed trauma of childhood gradually turns Simon’s life into a night­mare. Then he meets the mysterious Regina, with whom he feels a close bond. She alone seems able to bring him comfort and peace. But who is Regina?

Aimée de Jongh’s decision to draw in taut black-and-white with a powerful narrative rhythm, places the focus entirely on Simon’s inner world. She brilliantly weaves together the financial crisis, bullying, friendship and coping with trauma and shows true mastery of the graphic narrative.

An extremely mature debut. Makes you wish that far more graphic novels of this standard would appear in the Netherlands.

The realistic black-and-white drawings are reminiscent of Craig Thompson and thoroughly convincing. 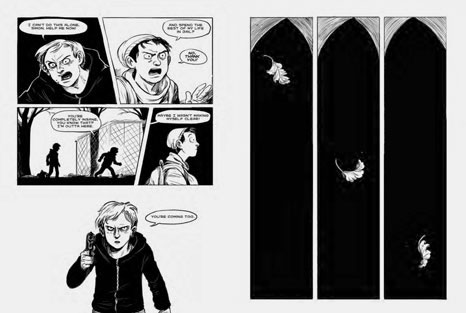