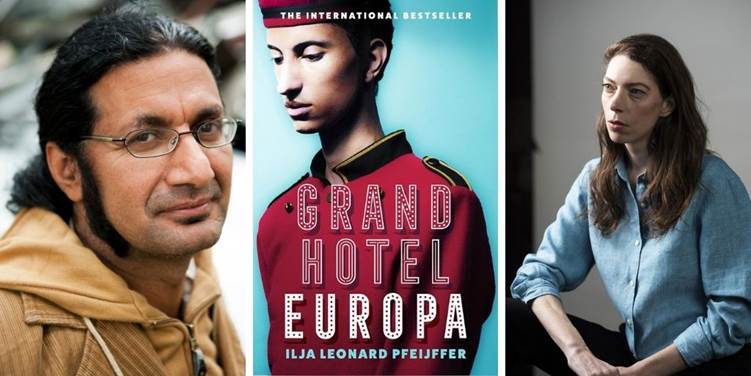 The New Dutch Writing campaign is delighted to welcome Dutch writers to the UK this Autumn with two key festival partnerships with Cheltenham Literature Festival and Off the Shelf Festival of Words, Sheffield. The exciting depth and breadth of the vibrant Dutch literary scene offers something for every reader in a programme of events featuring fabulous children’s books, insightful, timely nonfiction and brilliant contemporary fiction.

Winner of the 2022 European Literature Prize

The 2022 European Literature Prize goes to the Nocilla trilogy by Spanish author Agustín Fernández Mallo in a Dutch translation by Adri Boon, published by Koppernik. The jury describes it as ‘a fantastic book that shows what literature can do: precisely by withstanding all the crumbling apart and splitting up, and by demonstrating how that which appears fragmentary stands alone, reverberates, suddenly makes contact and forms an amalgam that turns out to have unforeseen properties’. The prize will be presented to Agustín Fernández Mallo and Adri Boon on Saturday 5 November at the Crossing Border Festival in The Hague by jury chair Manon Uphoff.

The Dutch Foundation for Literature, Flanders Literature, the Dutch Embassy in Berlin and the Diplomatic Representation of Flanders are launching the new podcast Kopje Koffie (Cup of Coffee) for the German readers and audience.

On the evening of Wednesday 3rd July 2019 Dutch and British representatives from the world of books and translation will gather to celebrate the launch of New Dutch Writing at The Union Club in Soho.

Rosemary Sullivan as WiR in Amsterdam

Canadian author Rosemary Sullivan will be living and working in Amsterdam from 2 to 31 May, upon invitation of the Dutch Foundation for Literature. She will be working on a book with the provisional title A Cold Case Diary, which is due to appear in 19 countries in the summer of 2020; in the Netherlands the book will be published by Ambo | Anthos.

Eight international poetry publishers and editors will visit Amsterdam and Antwerp, upon invitation of the Dutch Foundation for Literature and Flanders Literature. From 3-7 December they will be introduced to the Dutch field of poetry, meeting many publishers and writers.

Over 100 Dutch and Flemish authors will present themselves at more than twenty literary festivals throughout France. All this in the context of Les Phares du Nord (The Lighthouses of the North), an intensive campaign aimed at presenting Dutch literature in France, the second largest book market of Europe and the fifth worldwide.

From the 30th of May till 4th of June, Poetry International will bring approximately 20 of the most prominent contemporary poets worldwide to Rotterdam for the 48th Poetry International Festival. This means it’s time for a new edition of the translation project In Other Words.

The Flanders-Netherlands Guest of Honour programme at the Frankfurt Book Fair was a resounding success. In 2016, under the motto This Is What We Share, Flanders and the Netherlands organised the Guest of Honour programme at the largest trade book fair in the world. The ambitious programme ensured that more than 450 Dutch-language books were translated. The number of literary translations into German tripled compared to previous years. A new generation of writers was also successfully introduced into Germany. These are some of the conclusions of an evaluation conducted by the Flemish Literature Fund and the Dutch Foundation for Literature.

Literature from the Low Countries in London

January the 17th, Dutch and UK writers come together to perform in one of the most exciting venues in London, The Tabernacle. Join best-selling authors Herman Koch and David Nicholls along with a host of all-star writers from the Netherlands and a cabaret-style evening of High Impact entertainment: readings, chat, music, food and drink.

The Dutch Foundation for Literature and the Flemish Literature Fund look back with satisfaction on the success of the Flemish-Dutch Guest of Honour programme at the Frankfurt Book Fair, which ended on Sunday. Both directors are pleased with the results already achieved, with more translations than a Guest of Honour has ever generated before and huge media attention in Germany for Dutch-language authors, translators and illustrators. They stress, however, that the process of realizing a second ambition begins only now: the Guest of Honour programme at Frankfurt will give an important boost to the international appeal and further spread of Dutch-language literature internationally in the future.

In the period leading up to the Olympic Games, the Dutch cultural programme HOBRA will be held in Rio de Janeiro from 11 to 31 July. Ten Dutch and ten Brazilian artists and other creative professionals will form teams of 2. Each duo will create a new work within three weeks. The results will be presented to the Brazilian and international public during a large-scale concluding event.

Comics festival Erlangen focuses on Flanders and the Netherlands

More than ten Dutch-language graphic novelists have been invited to the 17th International Comic-Salon Erlangen, the most important international comic festival in Germany. Recent work by all the authors has been translated into German. Flemish and Dutch graphic novels will be featured in two exhibitions, a live drawing workshop, a special magazine, ‘Parade’ that will be printed on the spot on the Risograph and in loads of readings and encounters.

From 26 August through 5 September, seven Dutch authors will take part in a ten-day festival in São Paulo and Rio de Janeiro, organized by the Dutch Foundation for Literature and EYE International, with the theme of Dutch literature and film.

Germany theme of the Dutch Bookweek 2016

In the year in which the Netherlands and Flanders will jointly present themselves as guests of honour at the Frankfurter Buchmesse, the Dutch Boekenweek (Bookweek) aims at Germany, under the motto Was Ich nog zu sagen hätte. This was reported today by CPNB in a press release.

This year, the Poesiefestival Berlin has invited six Dutch-speaking poets from the Netherlands and Flanders to participate in the VERSschmuggel (“verse smuggle”) translation workshop.

From January the 19th until the 23rd 10 German fiction publishers visited the Netherlands and Flanders for an extensive tour through the literature landscape of the Low Countries. During this tour the German publishers presented their publishing houses.

The online magazine Publishing Perspectives features an article on Café Amsterdam, the City of Honor program at the Buenos Aires Book Fair: “Amsterdam is well known for its innovative and trend-setting cultural scene. Visual arts, design, music and the film-industry, all excel in this city. So does the Dutch publishing industry: in spite of catering to a so-called minor language, it counts more than 4,000 publishing houses and almost 2,000 bookstores, and it has published 45 million books in 2012. No doubt, Amsterdam is one of the most interesting cities to look at when it comes to the creation of books and catalogues.”

For questions concerning the activities of the foundation please contact Tiziano Perez or Hanneke Marttin.