The Dutch Embassy in Berlin and the Dutch Foundation for Literature produce in cooperation with Flanders Literature and the General Representation of the Government of Flanders the Kopje Koffie (‘Cup of Coffee’) podcast, aimed at German readers and listeners. Dutch writers with a new translation in German are invited to talk about their work.

In 2024, the Netherlands and Flanders will jointly be Guest of Hounour at the Leipziger Buchmesse, the largest public book fair in Germany. In the run-up to this major event a series of programmes at German festivals, houses of literature and other venues will be organised to draw attention to Dutch-language translated literature in Germany. The podcast ‘Kopje Koffie’ aims towards the same goal.

After traveling to The Hague, our moderator Bettina Baltschev met with Marcel Möring to discuss his new book Eden (btb). This is already the second release in Germany in 2022 after his novel Amen (Luchterhand). Marcel Möring, one of the most well-known and respected writers in the Netherlands, has worked on this book for seven years. We once again encounter the Jewish doctor Mendel Adenauer, who has been one of his main characters since Möring’s first novel in 1990. The narrator this time is Niekas, who seems to be immortal. He moves through time and space, describing his apprenticeship years, encounters with people, and the search for the book Raziel, which is said to contain the fate of all humanity. Finally, Niekas and Mendel meet in the present, changing the life of the latter in a significant way.

Dutch writer Cees Nooteboom celebrated his 89th birthday at the end of July. Katharina Borchardt visited the author in Amsterdam to talk to him about his life’s work. The occasion is the publication of Volume 11 of his collected works (Suhrkamp), which includes prose and poems from 2016 to 2021. This makes Cees Nooteboom the only foreign author to be honored by German publisher Suhrkamp Verlag with a consecutive edition of his works.

Katharina Borchardt met David Van Reybrouck at the embassy of Flanders in Berlin over a cup of herbal tea, because coffee is a hard drug for him, according to the author. He only drinks one cup of it a year, and he’ll feel the effects for three days! Nevertheless, he answered questions about his new book “Revolusi” (Suhrkamp), which deals with the Dutch colonial era and Indonesia’s struggle for liberation. The country wrote world history in 1945 by taking the lead in decolonization, which soon spread to Africa and changed the political map forever.

Starring in the ninth episode of Kopje Koffie, the German book podcast about Dutch literature: Dutch writer Jessica Durlacher talks in the Literary Society in Bielefeld with Katharina Borchardt about her book De stem (The Voice), published by De Arbeiderspers in 2021. In May of 2022, the book was published in German by Diogenes Verlag, under the title Die Stimme, translated by Annelie Bogener.

At their Kopje Koffie meetup in Brussels, Lize Spit served up a cappuccino and admitted she happily downs four a day. “Sometimes I need it too, because such a strong coffee can also give you a bit of courage to continue working.” In her conversation with Bettina Baltschev, she talks about working on her second novel Ik ben er niet (I’m not there), recently translated into German by Helga van Beuningen for S. Fischer as Ich bin nicht da.

Katharina Borchardt visited Stefan Hertmans in Ghent (Flanders/Belgium) for a long talk on writing habits and coffeerituals, reflections on a his authorship, and most of all, his novel De opgang, which has recently been translated into German by Ira Wilhelm for Diogenes Verlag as Der Aufgang.

Katharina Borchardt met Gerbrand Bakker over a cup of coffee to talk about his new autobiographical book Knecht, allein (translation of Knecht, alleen (Servant, Alone) by Andreas Ecke for Suhrkamp).

Marente de Moor was interviewed by Bettina Baltschev on her novel Phon. The German translation by Bettina Bach was published by Hanser.

Herman Koch talks about his novel Finse Dagen (‘Finnish Days’) that was published by KiWi, translated by Christiane Kuby and Herbert Post.

Judith Fanto stars in the second episode. With Bettina Baltschev she discusses her debut novel Viktor (published by Urachhaus, translated by Eva Schweikart). 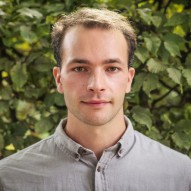