From 31 October 2014 to 15 March 2015, the Special Collections of the University of Amsterdam will present a major retrospective exhibition about the writer Arnon Grunberg. During the opening of the exhibition, Grunberg will also be appointed as an Honorary Fellow of the Faculty of Humanities of the UvA.

Arnon Grunberg’s career as a literary author started twenty years ago, with his startling debut Blauwe maandagen (Blue Mondays, translation Erica Pomerans). Since then, the writer has become omnipresent in the Dutch literature and media. He has also become known outside of the Netherlands; his work has been translated into at least 30 languages (often with support from the Dutch Foundation for Literature). In 2011, Grunberg loaned his archive to the Special Collections of the University of Amsterdam. This ‘living archive’ was used to create The Arnon Grunberg Exhibition – Ich will doch nur, dass ihr mich liebt. This exhibition sheds light on his life, oeuvre and authorship – with commentary by the author himself.

In recognition of his contributions to Dutch literature and society, the UvA Faculty of Humanities will appoint Arnon Grunberg as an Honorary Fellow during the opening of the exhibition on 30 October. As an Honorary Fellow, Grunberg will give lectures to students and one public lecture. The theme of the lectures will be privacy and surveillance, and a game will be developed with the students. The lectures given by Grunberg will be alternated with lectures on Grunberg. The lectures will take place in the HeritageLab (at the end of the exhibition), which will be renamed the GrunbergLab for the occasion.

At the same time, the GrunbergLab will also be used for innovative brain research conducted by the Netherlands Institute for Neuroscience of the VU University Amsterdam and TNO, in cooperation with the consortium partners Eaglescience, Noldus Information Technology and TMSi. Arnon Grunberg’s brain activity was measured while he wrote his latest short story, Het bestand (The File). Now the brain activity of hundreds of readers will be measured while they read Het bestand at the exhibition. The results will then be compared with the earlier measurements taken from the writer, with the aim of learning how to model emotions and creativity. Het bestand will be released as a collector’s item by Nijgh & Van Ditmar.

The exhibition will be accompanied by the publication of a richly illustrated book with contributions by Yra van Dijk, Bob Polak, Mark Schaevers and Vic van de Reijt, who also edited the publication together with Caroline Mulder. Arnon Grunberg – Ich will doch nur, dass ihr mich liebt, with design by Studio Ron van Roon, is 224 pages long and will be published by Nijgh & Van Ditmar in a bound edition (€ 45.00) and as a paperback (€ 29.95). In addition, the magazine De Boekenwereld will include an extensive discussion of Grunberg and the exhibition in its October issue.

A visit to the exhibition can be followed by a walk through Amsterdam Zuid, the neighbourhood that features in a number of Arnon Grunberg’s works. To mark the exhibition, the Dutch Literary Museum is adding a special Grunberg walk to its Literary Routes App – a free app for smartphones. The app will take you past locations from Grunberg’s life and work, from the house he was born in on Dintelstraat to the building on Van Eeghenstraat where he wrote Blue Mondays. It includes images and quotations from his work. 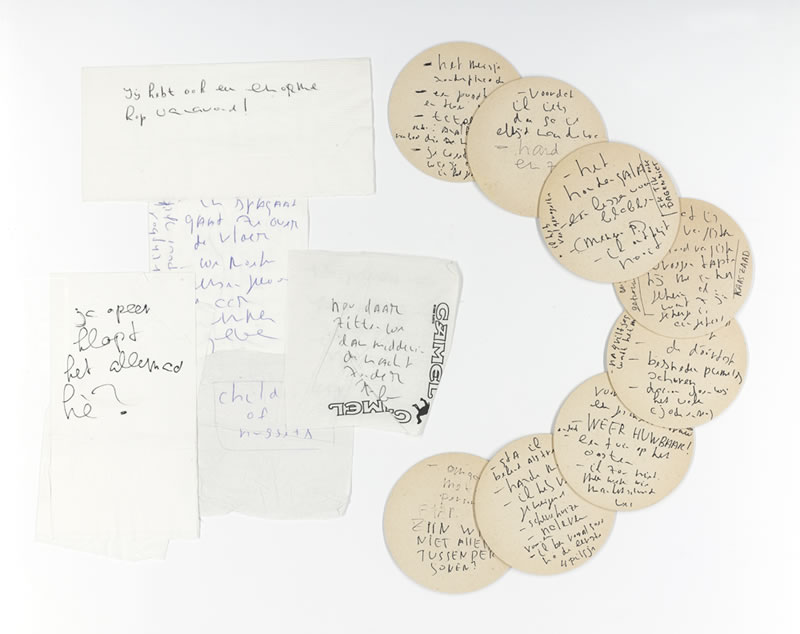