Three per cent, or more?

Translated Literature in England and America

In publishing circles the famous three per cent number is often mournfully cited: that is how many foreign-language translations are published in Britain and the U.S. as a percentage of the industry’s total output, from gardening books to thrillers, the remaining 97 per cent being homegrown. That three percent encompasses the entire rest of the world; therefore the proportion of books written in Dutch — as in the other “minor” languages — is minuscule. There is some good news, however: several new translation initiatives have sprung up, as well as a number of new, small independent houses concentrating exclusively translations.

What’s more, “we” have a true New York Times bestseller on our hands: The Dinner by Herman Koch, which has sold 300,000 copies in the U.S. to date (half of them e-books!).

Last spring at the annual London Book Fair, where publishing professionals convene from all over the world and English publishers hawk their latest offerings, the stand of Atlantic Books featured a life-size poster of Summerhouse with Swimming Pool, the successor to The Dinner (likewise translated by Sam Garrett), which, it is hoped, will be just as great a hit. The translation of Peter Buwalda’s bestseller Bonita Avenue (translated by Jonathan Reeder for Pushkin Press), for which the author had come over for a short book tour and to give interviews, had come out just before the Fair; it was enthusiastically reviewed in the following weeks in the major British newspapers and magazines. 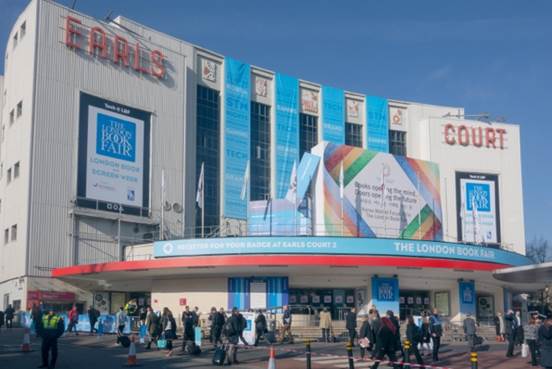 At the Book Fair I had about fifty meetings, each lasting no more than half an hour or so, to renew and develop my contacts with publishers and editors. Our brochure 10 Books from Holland contained a number of recent highlights. Thus I talked up Boy by Wytske Versteeg, who just won the BNG Literature Prize (…for best young novelists, I always add), a story in which bullying, adoption, and the grief over losing a child all play a role, the whole wrapped up in a clever structure and suspenseful plot. A good novel to compare it to is the English bestseller We Need to Talk about Kevin — to indicate we are dealing with a layered psychological thriller about the life of a teenager and a parent’s fears (or nightmares). In talking to English professionals, throwing in a reference to Shakespeare’s Richard III is likewise a must. We knew that Pristina, the new novel from Toine Heijmans, whose first book won the Prix Médicis Etranger, would also attract a great deal of interest. 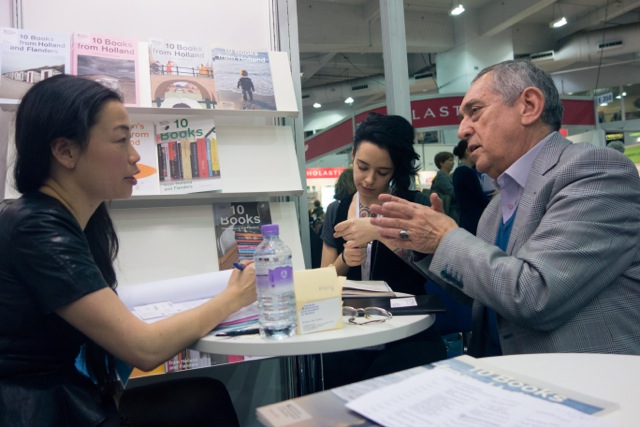 But besides the books in our brochure, my colleague Barbara den Ouden and I also mention titles not featured there because they are too recent, or just didn’t make the cut, or about which the publishers who come to us may have heard good things from their Dutch colleagues. Or we’ll discuss less recent books that are still garnering attention, like Ilja Leonard Pfeijffer’s La Superba, or The Decision by Britta Böhler, on which, I hear, Britain’s Haus Publishing is about to make an offer that is later accepted by the Dutch publisher Cossee. And then comes the news that for his new novel, The Detour, Gerbrand Bakker has received his second nomination for the IMPAC Award, the important international prize he won two years ago for The Twin (both translated by David Colmer and published by Harvill Secker).

The majority of the Dutch books that are translated — whether or not promoted by us — receive support in the form of a subsidy for the translation costs. The risk a foreign publisher runs in taking on a book by a writer who has never been heard of the publisher’s own country, complete with an unpronounceable name and the added expense of at least several thousand euros for the cost of translation — which they needn’t worry about in the case of a book in the native tongue of course —is largely compensated for by the Dutch Letterenfonds subsidy.

But what we are most often asked for is substantive and objective advice. So, for example, Britain’s Portobello Books has had some success with two books by Hella S. Haasse: Oeroeg (translated as The Black Lake by Ina Rilke) and The Tea Lords (also translated by Ina Rilke), and are asking us for further suggestions for other as yet untranslated Haasse titles. Fortunately we’re talking about a very large oeuvre.

Other classics are on the agenda as well: I talk about the progress of the brand new translation of Multatuli’s Max Havelaar for the New York Review of Books Classics series, and Penguin’s project The Penguin Book of Dutch Short Stories, edited by Joost Zwagerman, and the perennial question arises: why is there still no English version of Gerard Reve’s The Evenings? Hopefully we’ll soon be able to rectify that; the interest is there. 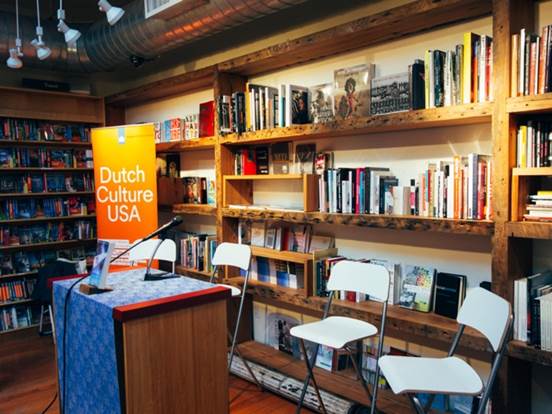 When you are a cultural diplomat of sorts like me, you have to take into account other countries’ customs and traditions, as well as a different culture, such as the one I encounter in America. “The Dutch can be terribly blunt,” says the New York publisher Peter Mayer when I visit him later that month in his Overlook Press office, “they don’t care about other people’s feelings.” I know just what he means, but am not sure about the last part: the directness of the Dutch, the way they say things that in America are regarded as better left unsaid, may not be indifference as such. The Dutch, in turn, don’t understand the (in their view) exaggeratedly formal attitude of the Americans; in the Netherlands, being honest about what you really think is appreciated as being clear and straightforward, while evasive politeness (“how interesting!”) is often misunderstood over here. On the other hand, Americans don’t understand our tendency to downplay our accomplishments — if you yourself don’t believe in what you’re doing, then why do it? The world is tough, and you’ve got to make it happen.

I therefore make sure to keep saying yes please and thank you as I follow a tight schedule — I am in New York for the PEN World Voices Festival (in which the authors Jaap Scholten and Geert Mak, both already translated, are participating), with readings and round-tables in various locations around the city. This event is specifically intended to promote international writers, which — as Americans euphemistically say — is a challenge.

The major publishing houses are traditionally difficult to interest in translations, unless the book is by a Nobel Prize winner who will sell millions of books. For the average Dutch — or German, or Danish, of Finnish — novel, with sales in the low thousands, some good reviews and/or a minor literary award, it’s often a losing battle.

The remarkable thing is that print runs in giant America are not so very different from those in our own small country. Books that do take off can become mega bestsellers, of course, but for what is called the midlist, the size of the market is about the same. Nescio’s Amsterdam Stories (translated by Damion Searls and published by New York Review of Books Classics in 2012) found about four thousand new American readers, and its editors were more than happy with that number. The problem is that in some regions of the USA people read little or not at all, and even in the major cities — like Manhattan — bookstores often lead a precarious existence. The Borders chain has disappeared, as have many of Barnes & Noble’s branches; the smaller bookshops, too, have trouble making the exorbitant rents. 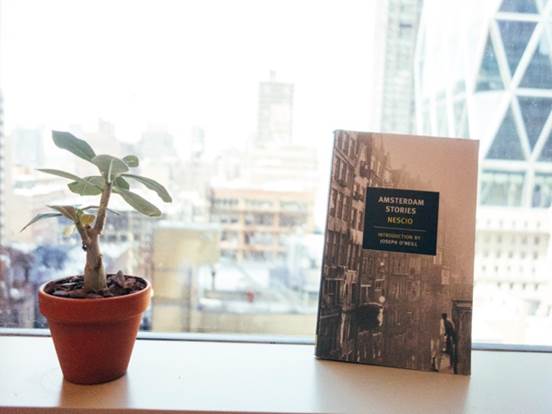 It is therefore even more gratifying to see besides the major trade publishers an increasing number of dynamic independents, run with small staffs or even by a single individual. Think of Archipelago, Melville House, Deep Vellum, Open Letter, Graywolf, New Vessel Press: almost all names that have arrived in the American marketplace in the past ten years, some even more recently. And these presses tend to have a very diverse list — Seven Stories Press, for instance, is issuing a book of essays by Tijs Goldschmidt, Archipelago Books has published Gerbrand Bakker, Louis Couperus and Hugo Claus, and hopefully more titles will soon be added to this list. The best news comes from the hip independent Tin House: in 2016 they’ll be publishing a new translation of Jan Wolkers’ Turkish Delight (by Sam Garrett, who has also translated Koch and Grunberg).

The last time I was in New York, a number of editors told me they had bid in the auction for Herman Koch’s The Dinner before it came out in the Netherlands. This time I paid a visit to Alexis Washam, the winning editor for this bestseller. In her office in the Random House building on Broadway she showed me the galleys of Summer House with Swimming Pool. Also in her office: a bottle of Dutch gin and a copy of Nescio’s Amsterdam Stories, a memento of her participation in the Amsterdam Fellowship Program organized by the Letterenfonds. Despite the fact that her list comprises a limited number of translations, she had just acquired the rights to Bonita Avenue, initially scheduled for publication later next year, but now moved up to January because the reviews have been so good.

At the end of the week I meet up with Sanneke van Hassel and Annelies Verbeke at BookCourt, a large Brooklyn bookshop, for an event launching a special edition of [Words Without Borders] devoted to new Dutch and Flemish writing. The evening is jointly organized and sponsored by the Netherlands Consulate in New York, Flanders House, the Flemish Literature Fund, and the Dutch Letterenfonds. Together with the American writer Joseph O’Neill — who, known for his novel Netherland, spent his childhood in The Hague and wrote the foreword to Nescio’s Amsterdam Stories — we discuss what we’ll present that evening. The short stories and novel excerpts we choose — from Mensje van Keulen to Maartje Wortel, from Yves Petry to Arnon Grunbert, from Walter van de Berg to Elke Geurts — all fit into the overarching theme, which is “Taboos”. The view of our countries from abroad has long been that we stand for openness and progressiveness, and we tend to present ourselves accordingly; the theme under which the Netherlands and Flanders were introduced at the 1993 Frankfurt Book Fair was “Weltoffen”, or outward-looking, open to the world.

But is that really so? The writers we chose, most of them of the younger generation, confirm that our society most definitely harbors deep secrets and taboos. Our much-debated “freedom of expression” now often seems to have become the right to insult. Herman Koch’s The Dinner concerns itself with that much-vaunted tolerance too: if your own offspring have committed a grisly crime, do you report them to the police or do you try to get away with it?

Maartje Wortel exposes a unique Dutch habit in her story: employing diseases like cancer, typhoid or cholera as swearwords, something that doesn’t exist in any other language. The protagonist in her story, who suffers from cancer, keeps exclaiming “Canoes!” as a substitute expletive for “Cancer!” Thus that evening in Brooklyn provided much food for discussion, as well as the opportunity to introduce a substantial group of new readers to writing from the Netherlands and Flanders. Just two weeks later, Joost Swarte, the graphic novelist and master illustrator, was a hit at New York’s MoCCA Arts Festival “in conversation” with Art Spiegelman; in June one of his drawings graced the cover of The New Yorker. A complete American breakthrough may not yet be in sight, but with all these successes and all these initiatives, Anglo-Saxon interest in Dutch literature is greater than ever.

It is gratifying to see besides the major trade publishers an increasing number of dynamic independents, run with small staffs or even by a single individual.

Victor Schiferli (1967) is responsible for the promotion of fiction and Dutch and Frisian poetry and classics worldwide. He also coordinates the literary events in Germany.