In Remco Campert (1929-2022) Dutch literature has lost one of its best-loved writers. He wrote poems, stories, novels, novellas and columns, and in 1976 was awarded the PC Hooft Prize for poetry, in 2011 the Gouden Ganzenveer and in 2015 the Prijs der Nederlandse Letteren (Dutch Literature Prize) for his oeuvre as a whole. In recognition of his major contribution to Dutch literature, Campert had been in receipt of an annual ‘honourgrant’ from the Dutch Foundation for Literature since 2004. 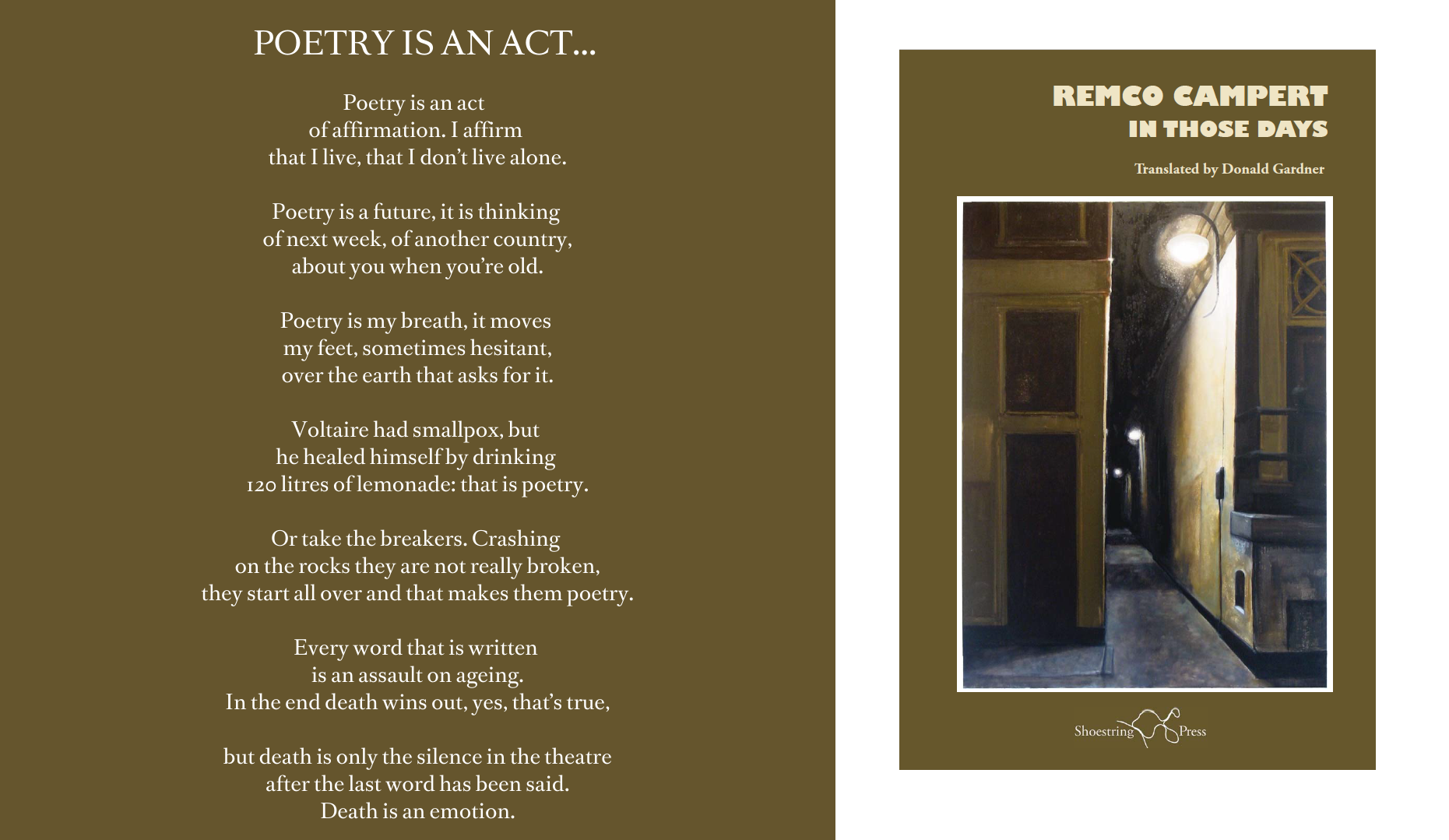 At the start of his literary career, Campert became friends with the new, experimental generation of poets, the Vijftigers, a group that he joined. Together with his schoolfriend Rudy Kousbroek, he set up the magazine Braak (Waste), in which he published work by his slightly older contemporaries Lucebert, Gerrit Kouwenaar and Bert Schierbeek. In 1951 his first poetry collection appeared, Vogels vliegen toch (Birds Fly Anyhow). In comparison to the poetry of his experimental friends, Campert’s tone was accessible, loose and free, not unlike the way he characterized jazz musician Chet Baker in one of his poems: ‘His voice is a soft rain / Like the small feet of the strange girl / On the plump carpet.’

Jazz was one of the themes of his work, as were love and poetry (‘Poetry is an act of confirmation’). His poems read like personal, lyrical diary entries from a life of much drinking and fretting but in which there was also room for perspective. The latter was created above all by his magnificent, restrained style in which every word was in precisely the right place and so achieved the desired effect. One of his most famous novels is Het leven is vurrukkulluk (Life Is Grrrreat, 1961), which has an epigraph by M. Nijhoff: ‘They sing, nod and kiss / Not for love, but for the sublime / Moments and the feeling in between.’ The book tells the story of Boelie and Mees and Panda, two layabout friends and their secret love interest, the girl Panda, who spend their time doing nothing and enjoying it as far as they can. They have no scruples, since they rob an old man in the park and spend the money on throwing an unforgettable party, even though the world around them is held together by tricks and deceit.

In his later prose Campert continued to navigate between darkness, as in his Book Week Gift Sombermans actie (Somberman’s Action, 1981), and humorous lightness, as in his ode to happiness, Gouden dagen (Golden Days, 1990) and the relational slapstick of De Harm en Miepje Kurk Story (1983). His autobiographical sketch Over mijn vader (About My Father) is particularly searing. It tells of the life of his father, journalist and poet Jan Campert, whom he barely knew and who died in a German concentration camp after being arrested for his work with the wartime Dutch resistance. Despite Jan’s famous poem ‘Het lied der Achttien Dooden’ (‘The Song of the Eighteen Dead’), one of the first works to be published by De Bezige Bij, his father had always been a mere shadow to Remco. In this small, moving book he nevertheless brings the older man close.

Two later books, Een liefde in Parijs (A Love in Paris, 2004) and Het satijnen hart (The Satin Heart, 2006), were a great success. In those two novels he drew upon his memories of the time when he was a young poet in Paris trying to find connection and inspiration. In other books he again looks back, as he does in the poetry collection Nieuwe herinneringen (New Memories, 2007): ‘Antwerp girl / you’re still on my mind / what have I done / with my life’ (translation Donald Gardner). Campert stopped writing several years ago, although sometimes observations by him appeared in de Volkskrant. His name resounds through all of Dutch literature, his work an inspiration to younger writers.

His work has been translated into a dozen languages. German translations of Een liefde in Parijs (Eine Liebe in Paris) and Het satijnen hart (Das Herz aus Seide, both Arche Verlag, translation Marianne Holberg) were particularly succesfull. His poetry appeared in numerous anthologies worldwide; selections of his poetry have been published in Germany, Greece, Indonesia, Sweden, Spain, the U.K. and U.S.A.