The Dutch Foundation for Literature’s Translation Prize 2022 goes to Veronika ter Harmsel Havlíková. She will receive the sum of €15,000. The Foundation is giving her the prize in recognition of her outstanding translations of important Dutch titles into Czech, as well as her crucial role as adviser to new translators and as an intermediary on behalf of Dutch literature. 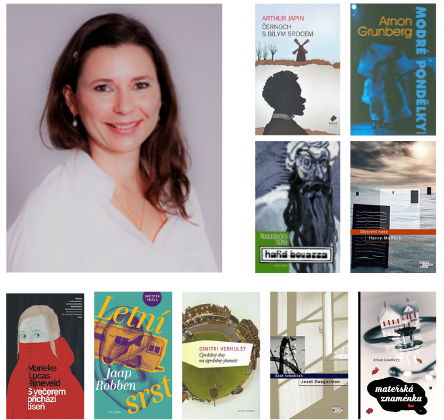 For Dutch literature in the Czech Republic, Veronika ter Harmsel Havlíková is a key figure. She successfully draws the attention of Czech publishers to literary works in Dutch; as a result of her efforts, Czech translations have appeared of work by Jan Wolkers, Arnon Grunberg, Hafid Bouazza, Joost Zwagerman, Dimitri Verhulst and Jaap Robben.

I have known the translator Veronika Havlíková for quite a long time. The first book published in Odeon in her translation was the novel Zes sterren in 2005. Since then, she has translated a number of titles by outstanding Dutch authors, including the classic Harry Mulisch, or new contemporary prose works such as Dimitri Verhulst or Jeroen Olyslaegers. Veronika is a great translator who has always been a pleasure to work with. She has also often lectured books for us and recommended new releases herself. I believe she has made a significant contribution to the Czech-Dutch cultural exchange. Congratulations to her on the award! - Jindřich Jůzl, editor-in-chief Odeon

Ter Harmsel Havlíková also shares her impressive expertise with younger colleagues, through translation workshops and mentorships, for example. Her oeuvre as a translator is highly diverse. As well as fiction by classic and contemporary authors – ranging from Jacob Israël de Haan to Jeroen Olyslaegers and Marieke Lucas Rijneveld – she has also translated literature for children and young adults, graphic novels by Barbara Stok and Serge Baeken, poetry by Mustafa Stitou and non-fiction by Eva Meijer, Alexander Münninghoff and Geert Mak

Veronika ter Harmsel Havlíková (b. 1972) was born in Prague, where she studied German and Dutch at Charles University. She gained her master’s degree with research on the first Dutch pop-art novel and went on to complete postgraduate studies in literary theory at the Palacký University in Olomouc. After several years working at international schools in Prague, she taught at Palacký University and at the Masaryk University in Brno. She is currently director of the language and training institute Dutch Language and Culture in Prague, and since 2013 she has been on the board of the Association of Literary Translators in the Czech Republic. In 2011 Veronika ter Harmsel Havlíková received the Exceptional Creativity Prize from the Association of Translators for her translation into Czech of The Discovery of Heaven by Harry Mulisch.

With the Dutch Foundation for Literature’s Translation Prize, the Foundation awards literary translators who have distinguished themselves both by the quality of their oeuvre as translators and by their efforts as ambassadors for a specific language area or genre, or for literary translation in general. In even-numbered years the award goes to a translator from Dutch and in odd-numbered years to a translator into Dutch. The prize will be presented on 1 July 2022, during the Literaire Vertaaldagen in Amsterdam. The jury for the Translation Prize for a translator from Dutch is made up of the staff of the Foundation’s international department.