Last Sunday, October 31th, Sandra Langereis received the Libris Geschiedenis Prijs for her book Erasmus: dwarsdenker (English title: Erasmus The Maverick - A Biography). The Libris Geschiedenis Prijs rewards historical books that appeal to a general audience. Langereis’ portrait of Erasmus came about with a biography grant from the Dutch Foundation for Literature, and is featured in the Dutch Non-Fiction - Spring 2021 brochure.

The Libris Geschiedenis Prijs is awarded annually for the best historical book of the last year. According to the jury, the biography of Erasmus is ‘an exceptional book through which you get to know the historical figure Erasmus as a person, with his good and his bad qualities.’ By winning the prize, Langereis receives € 20.000. 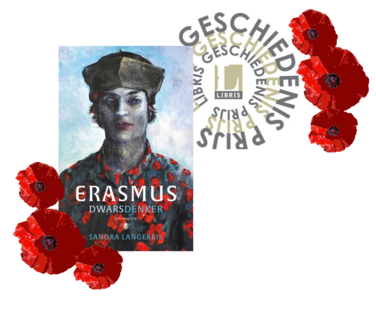 In this monumental biography, Sandra Langereis – historian and specialist in the 16th-century world of letters – makes use of a wealth of archival material. Erasmus’ published correspondence alone consists of more than 3,000 letters. She paints a detailed portrait of Erasmus, which clearly shows his merits and those aspects of his personality that were less admirable. But if Erasmus had only been ambitious and arrogant, then people would not have written about him for over five centuries. Although Erasmus is still seen as a critical thinker and an advocate for tolerance, we can only understand him within his day and age. This is why Langereis closely examines the contemporary historical, cultural and religious developments. All of this is written in a narrative, accessible style, without pomposity or endless citations. Langereis’ biography of Erasmus is not only the new, definitive biography of one of Europe’s greatest intellectuals, it is also an attractive, informative cultural history beyond compare.

Sandra Langereis (b. 1967) is a historian of science and culture and a biographer. Her previous biography, The Wordsmith, about the 16th-century printer and publisher Christoffel Plantijn, was nominated for the Libris History Prize and chosen as best biography and best history book of 2014 by the newspapers de Volkskrant and Trouw. She considers her biography of Erasmus, in which he is portrayed as a rational and tolerant man, as ‘relevant for people today’.