Back to the Buchmesse

It was a question that had occupied people’s minds for months: would the Frankfurt Book Fair take place? And if so, in what form, and who would be there? Since the Netherlands and Flanders had been guests of honour in 2016, the Dutch Foundation for Literature, along with other focus countries, had been kept abreast of efforts to organise a safe fair in online meetings with the fair’s organisers. Should masks be worn? How much distance should visitors keep from each other? How wide should the corridors be? In the summer it became clear that the fair would take place – with restrictions, but there was an air of optimism.

All the book fairs (London, Leipzig, Bologna, Paris, Turin) had been cancelled following the start of the pandemic in March 2020 so international publishers had been unable meet in person for quite some time. Of course it was possible to meet in Teams, Zoom or Google Hangouts, and all kinds of brochures, manuscripts and samples translations were e-mailed around. But a computer screen remains a computer screen and experience has shown that editors and publishers have become more selective in making such appointments because they are often rather time-consuming.

The fixed, busy schedule of a book fair is energizing and highly efficient. It’s very different at home. When you’re sitting in your study, talking enthusiastically to your computer screen about a book you recommend, it’s almost impossible to see how the other person on the other side of the world is responding. At a fair you know when someone gets a gleam in their eye you can continue onto the plot and the sales figures. If someone keeps staring past you, you think: let’s quickly move on to the next book. 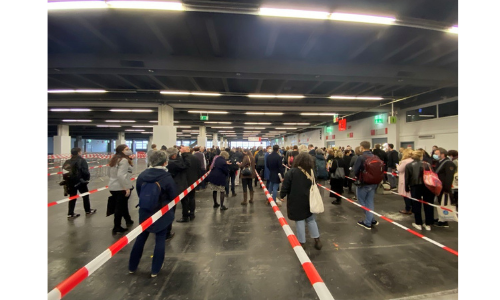 Unfortunately, the Frankfurt Buchmesse didn’t have a collective Dutch publishers stand this year. The Dutch Foundation for Literature’s stand was in hall 4.0, which had housed German publishers last year. We were in corridor C, not far from publisher De Harmonie’s stand. Directly opposite us was a large stand from Russia, diagonally behind us, Books from Slovenia, and at the front of the hall, the Flemish stand and others like Norla and FILI (the Norwegian and Finnish equivalents of the Dutch Foundation). The old 5.0, where we’d been located in recent years, was covered in scaffolding for renovations.

Making appointments started cautiously, but slowly the schedules of my colleagues Barbara den Ouden, Agnes Vogt, Tiziano Perez and myself filled up. It often took a while before people decided whether to go, but in the weeks before the fair numbers increased. These were German, French, Italian and Spanish publishers in particular, some Eastern Europeans, the odd Americans (I counted two), a few English. In the end, I had half the normal number of appointments, and that at a fair that was only allowed to let in 25,000 instead of almost 75,000 people a day. 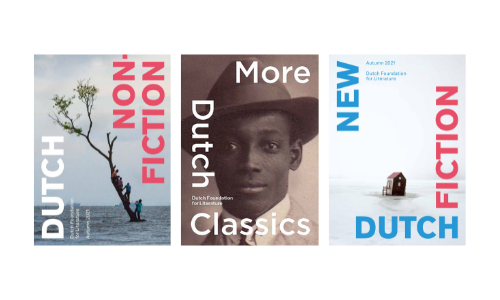 The Dutch Foundation for Literature’s most recent brochures

But the fair often focuses on what is new and sometimes hasn’t even been published yet. De Bezige Bij, for example, sold the rights to the unpublished novel Mary by Anne Eekhout to England (Pushkin Press) and America (HarperCollins Via) before the fair started, which created a buzz. In Germany an auction was held between several publishers who wanted to buy it and the rights were sold to France (Gallimard), Hungary (Libri) and Italy (Neri Pozza). The German rights eventually went to Random House/BtB in Munich. A fantastic success, and many conversations were about this book and whether the rights were still free.

In any case, it is a good moment for young Dutch authors: Marieke Lucas Rijneveld graced the cover of Die Zeit because of the publication of their second novel Mijn lieve gunsteling (as Mein kleines Prachttier) by Suhrkamp, ​​who will also publish two collections of their poetry in a single volume next year. Rijneveld’s work is now published in 39 languages. Tobi Lakmaker was also a great success with the book The History of My Sexuality (seven Countries). Lale Gül’s debut I Want To Live had already been sold to five countries. With such striking titles up your sleeve you can convince publishers that their country (if rights are still free) should also buy the rights and that we have other good things to offer too.

There was also a lot of interest in and sales of children’s books: amongst others, Gouden Griffel winner Gozert van Pieter Koolwijk and Linde Faas, Wonderbos by Jan Paul Schutten and Medy Oberendorff, in the new books by Annet Schaap ( De meisjes) and Edward van de Vendel (Rekenen voor jouw leven in collaboration with Ionica Smeets and Floor de Goede). 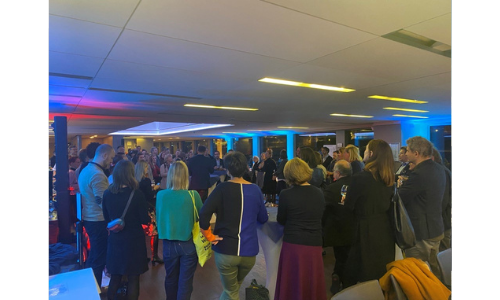 On Friday evening I took a boat trip along the river Main with a large delegation of German literary festivals and events organisers, as well some (mainly) independent publishers. It was the perfect place to make new contacts with a view to getting Dutch writers invited to read at important venues. Lots of business cards were exchanged and plans made. All in all, it was a quiet but successful fair, which was very manageable despite the Covid measures. Moreover, it showed that the book industry can take a beating. Nevertheless, it was worrying that the major renovation of hall 5 is currently at a standstill due to lack of resources. Hopefully the Frankfurt book fair will continue to exist for many years to come, although it seems that the presence of 300,000 visitors, as there were in 2019, will certainly remain a thing of the past for now.