Selma van de Perre-Velleman received a Royal distinction at a festive, digital award ceremony. Dutch Ambassador to the UK, Karel van Oosterom, presented the award. Selma van de Perre, who now lives in London, was a member of the Dutch Resistance in World War Two. She is one of the few survivors of the Ravensbrück concentration camp who are still alive today and has spent the last few decades tirelessly informing younger generations about the horrors of the War.

Among the many guest were Karel van Oosterom, the Dutch ambassador to the UK, and Princess Mabel of Orange-Nassau. Selma van de Perre-Velleman was pleasantly surprised by the award and the number of people who tuned in to watch her receive the title of Knight in the Order of Orange-Nassau:

“It’s a very high award, and I was quite surprised that I received it, really, until I was told that I was going to receive it. I had no idea. A great surprise and a very pleasant surprise.”

The Jewish Selma Velleman went into hiding in 1942. She dyed her hair blonde and joined the Dutch Resistance under the alias Marga van der Kuit. She was arrested and sent to Ravensbruck as a political prisoner in 1944, where she tampered with gas masks in an attempt to save lives. She was liberated from Ravensbruck on 23 April 1945. That same year, she moved to the UK where she worked for the BBC and met her future husband, Belgian journalist Hugo van de Perre. 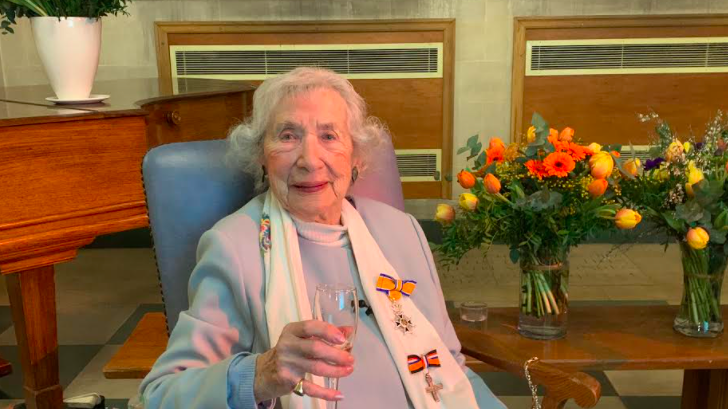 Selma van de Perre-Velleman. Photo: Embassy of the Kingdom of the Netherlands.

Hundreds of trainee teachers have been inspired by Selma during study trips to Ravensbrück, where Selma has been going year after year to make sure her story - and that of many, many other victims of the War - is not forgotten.

In 2020, she wrote the book Mijn naam is Selma (My Name is Selma, Scribner). Today, over 57,000 copies of the book have been sold. Her story has been translated into German, English, Finnish, French, Hebrew, Hungarian, Italian, Polish, Portuguese, and Czech. Selma van de Perre has written it to pay tribute to all the Jewish-Dutch resistance fighters who did not make it out of the war alive, and felt it was her duty to raise awareness after finding Britons were largely unaware of their efforts:

‘In this personal testimony I have recorded the small details that made up our lives, the sheer luck that saved some of us and the atrocities that led to the deaths of so many. It is a tribute to all those who suffered and died, and to my courageous friends and colleagues in the resistance who risked their own lives to try and save others. The horrors of World War II and the bravery of the people who defied them must never be forgotten. I hope this book will contribute to their lasting memory.’