7-8.30pm, 17th March 2021: The Dutch Riveter launches with a literary cabaret of readings, discussion, live drawing and music in partnership with The British Library.

Over the past decade several Dutch writers have won acclaim in the UK – Herman Koch and Geert Mak among them – but there are many new poets and prose writers ready to burst onto your bookshelves, inspired by the success of Marieke Lucas Rijneveld. Gender, post-colonialism, racism and the future of Europe are hot topics for writers not just in the UK but in the Netherlands too. In this special Dutch edition of The Riveter, you will be able to discover the latest trends in Dutch literature, through extracts, reviews and specially commissioned features.

To mark the launch of The Dutch Riveter magazine, we bring together three outstanding Dutch writers, Karin Amatmoekrim, Simone Atangana Bekono and Jaap Robben and the great translator Sam Garrett, to discuss those riveting topics, translation and that new Dutch writing. Hosted by Rosie Goldsmith.

Part of New Dutch Writing supported by The Dutch Foundation for Literature. Free PDF copies of The Dutch Riveter will be available on the night. 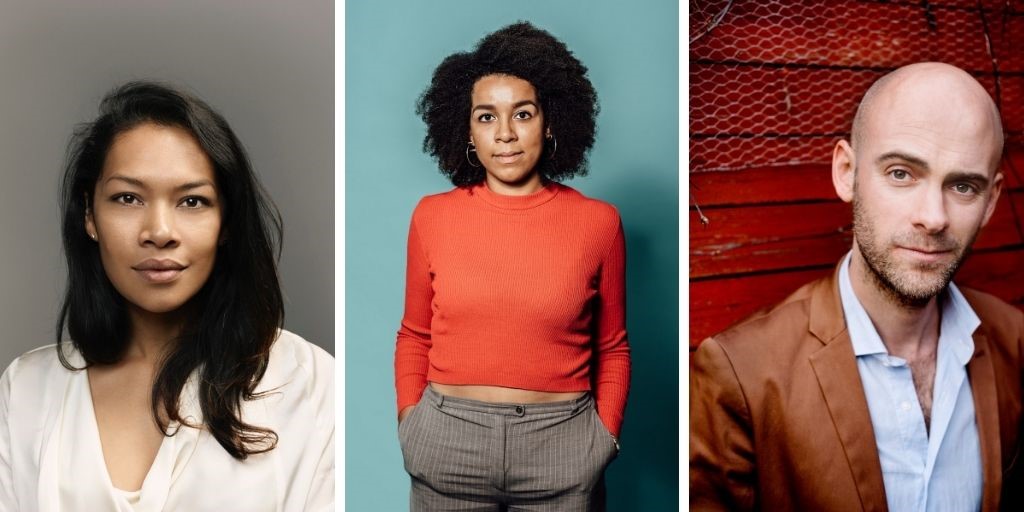 KARIN AMATMOEKRIM is an award-winning Surinamese-Dutch writer with Indonesian, Chinese, African and Native American ancestry. She is the author of six novels, a memoir, numerous essays and short stories.

SIMONE ATANGANA BEKONO’s first poetry collection in 2017 immediately won prizes in the Netherlands and was published in English by The Emma Press in January (how the first sparks became visible, trs David Colmer ). Her debut novel Confrontaties came out in Dutch in 2020.

SAM GARRETT is a prolific translator of Dutch literature, twice winner of the British Society of Authors’ Vondel Prize for Dutch-English translation. In 2012, his translation of The Dinner by Herman Koch became the most popular Dutch novel ever translated into English.

JAAP ROBBEN is a poet, playwright, performer, and acclaimed children’s author. You Have Me to Love received international glowing reviews and is currently being adapted into an English-language film. His latest novel Summer Brother (trs David Doherty) was recently published in English by World Editions.

ROSIE GOLDSMITH was a BBC journalist for 20 years. Today she is (amongst many things) Editor-in-Chief of The Riveter and Director of the European Literature Network.

Enjoy live music from Vanwyck, a well-known singer-songwriter on the Dutch music scene, in the footsteps of Leonard Cohen and Laura Marling, and live drawing from Henny Beaumont, illustrator and political cartoonist, beloved of Guardian readers and festival-goers.