The 2020 Golden Slate Pencil for the writer of the best Dutch children’s book of the year has been awarded to Bette Westera for her book Uit elkaar (Breaking Up, Gottmer Publishers), illustrated by Sylvia Weve. The Golden Paintbrush 2020, the most important Dutch prize for an illustrator of children’s and young adult literature, goes to Yvonne Jagtenberg for Hup Herman! (Gottmer Publishers). These prestigious prizes were presented on national television at the launch of the Dutch Children’s Book Week.

‘Uit elkaar offers a kaleidoscopic view of love by covering its many manifestations. […] According to the jury, a book that is so unique, striking and comprehensive, deserves to be awarded the 2020 Golden Slate Pencil.’ from the jury report 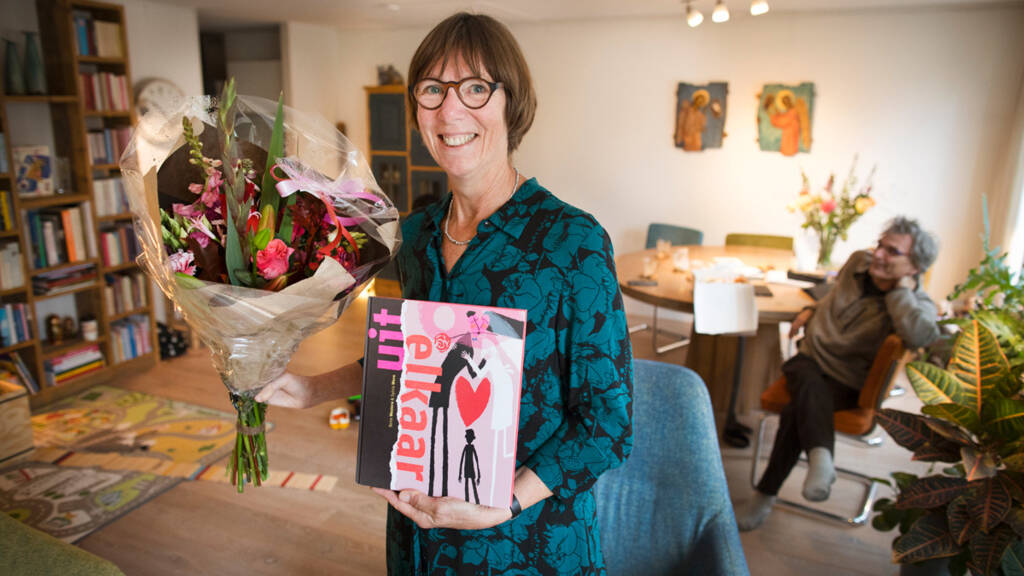 Uit elkaar is a poetry collection about love - that has failed, run aground or ended in separation. A boy who sees his dad kissing his teacher. A girl who finally gets the big (half-)brother she’s wanted for so long. Stepmothers who actually turn out to be okay. In the rhythmic verses, no subject remains undiscussed. Sadness, infatuation, cheating, new family structures — Westera writes with a light touch and often with humour.

The book’s illustrator Sylvia Weve has won a Silver Paintbrush for her part in this remarkable poetry collection. Earlier this year, Uit elkaar was awarded another important award, the Woutertje Pieterse Prize. The book will be translated into German (Susanna Rieder Verlag).

The very successful duo Westera and Weve created five collections of poetry together, for which they have won all major awards in the Netherlands. Their previous collection Doodgewoon (Dead Simple) also won them the Golden Slate Pencil and the Woutertje Pieterse Prize in 2015.

‘Text and image originated from the same hand and it shows, it really forms a unity. […] All in all, Hup Herman! is a more than successful and sympathetic picture book with a breathtaking protagonist whose emotions (confusion, satisfaction, determination, fatigue) are aptly portrayed. A book that can be read over and over again and that gives the adult reader an extremely good feeling as well.’ from the jury report Hup Herman! is a delightful book about a pot bellied big named Herman who was never very competitive, until one day he decides to show the other animals he is the fastest of them all. But is winning as important as he thinks it is?

This is the second consecutive Golden Paintbrush for Yvonne Jagtenberg; last year she was awarded this prestigious prize for Mijn wonderlijke oom (Rubinstein), her ode to Jacques Tati and his film Mon oncle (1958). She was awarded the Charlotte Köhler stipend for her oeuvre in 2002. Her work has been translated into nine languages.

If you would like to know more about these titles or other Dutch children’s books, please contact our genre specialist Agnes Vogt.