We Slaves of Suriname reaches the bestseller lists, 86 years after publication

We Slaves of Suriname by the Surinamese writer and activist Anton de Kom (1898-1945) is one of the most important anti-colonial writings of the 20th century. It is on a par with W.E.B. Du Bois’ Souls of Black Folk (1903) and Frantz Fanon’s Les damnés de la terre (1961). The book is the first, but still one of the few works to describe Dutch colonial rule and Suriname’s slave economy.

More than just a historical account, the book is an impressive literary indictment of slavery, but also of the period after its final abolition in 1873, after ‘liberation’ - a term De Kom used cynically, because inequality was barely diminished and slavery had left deep wounds: ‘No nation burdened with a hereditary feeling of inferiority can reach full maturity.’

De Kom’s life and work still appeals to the imagination. In June 2020, he was included in the new Canon of Dutch History, taught at schools in the Netherlands. Eighty-six years after the first edition, a new edition of We Slaves of Suriname was published, with introductions to his life and work. This new edition has been on the Dutch bestseller list for weeks.

Anton de Kom was an exceptional man. In his introduction to the latest edition, Mitchell Esajas, the founder of the Dutch Black Archives, compares him to Martin Luther King, Marcus Garvey, Malcolm X and Rosa Parks. ‘Given his words and deeds, Anton de Kom fits perfectly on that list.’ De Kom’s father was born into slavery. Besides being a writer and historian, he was also an activist and resistance hero. In the 1920s, he joined anti-colonial protests in the Netherlands and immersed himself in the struggle of the trade unions for fair working conditions. In 1933, shortly after his return to Suriname and because of his efforts to defend the rights of workers, he was detained by the Dutch colonial authorities in Fort Zeelandia (once built as a prison for enslaved people) and then deported to the Netherlands without trial. There he continued his political work, not only against colonialism and capitalism, but also against Nazi rule following the German invasion in May 1940. In 1943, he was arrested and deported to the Neuengamme concentration camp near Hamburg. In April 1945 he died in the Sandbostel camp near Bremen. 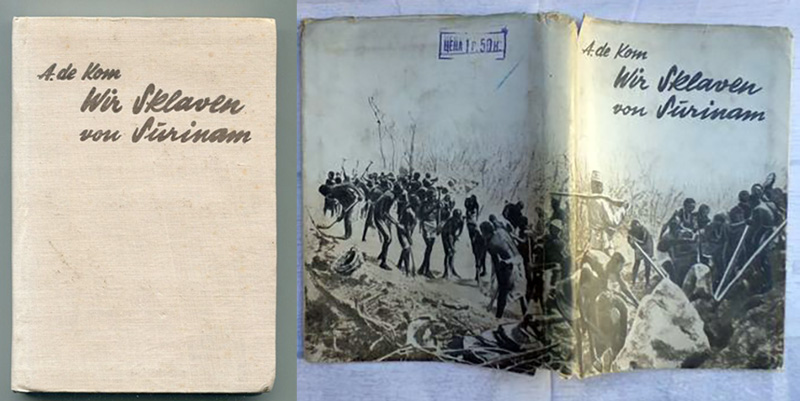 Until now, there has been little interest in De Kom’s work outside the Dutch language area and a small circle of specialists. The first German translation was published in 1935 by a communist, anti-colonial publisher, the Verlagsgenossenschaft ausländischer Arbeiter in Moscow, in a translation by the socialist writer Augusta de Wit. In 1936, it was published by Ring Verlag in Zurich. Transit Verlag will publish a new German edition of We Slaves of Suriname, translated by Birgit Erdmann, in spring 2021, which will also include the introductions to the new Dutch edition. Several English publishers have now expressed their interest. Moving Dreams production company is working on a film about the life of Anton de Kom.

No nation burdened with a hereditary feeling of inferiority can reach full maturity.