Irina Leek-Trofimova has been shortlisted for the Мастер-award. She is nominated for her Russina two translations of two children’s books by Toon Tellegen, Is er dan niemand boos (The day no one was angry) and Brieven aan niemand anders (Letters to anyone and everyone).

The Мастер-prize (Master-prize) is awarded annually for the best translations in several categories; Irina Leek-Trofimova is nominated in the category childrens’ literature. The shortlists were announced in the first week of April; the award ceremony has been postponed due to the COVID-19 outbreak. 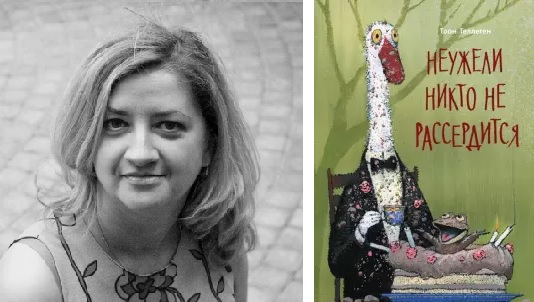 Irina Leek-Trofimova graduated from the Moscow State Linguistic University in 1995, where she worked as a teacher of Dutch language until 2010. She translated more than 10 works by Toon Tellegen, and works by Annie M.G. Schmidt, Anna Woltz, Stefan Brijs, Saskia Noort and many others into Russian. Besides working as a translator, she is also a writer.

Toon Tellegen became famous primarily for his poetic, philosophical animal stories about Squirrel, Ant, Mole, Hedgehog and the other animals, who are carefully trying to find their way in an incomprehensible world. His extensive oeuvre also includes fairytales, children’s books and poetry and prose for adults. His work has been translated into numerous languages, among which Chinese, Danish, German, English, French, Serbian, Italian and Japanese.