Poet and translator in conversation

Lieke Marsman’s very personal collection The Following Scan Will Last Five Minutes was translated from Dutch by Sophie Collins, and published last April by Pavilion Poetry. The book was written in the three months following the poet’s diagnosis of chondrosarcoma, a rare form of bone cancer, at the age of twenty-seven. It includes a series of short poems and an essay responding to Audre Lorde’s reflections on cancer, and mixes personal experiences of the disease with social criticism. The English translation ends with a translator’s note in the form of a letter to the author. The Poetry Book Society interviewed both the poet and translator to learn more about this moving book and its themes, and to explore their collaboration and the translation process.

What are the author's and translator's favourite verses from the poems in the book and why?

Lieke Marsman (LM) - 'I like the poem 'Treats' best, as it was the first thing I wrote since being ill that I wrote in the kind of writing-rush that writing poetry can be, and I still feel it when I read it. Most of the other poems are more collage-like, assemblages of loose sentences that came to me in the panic of hearing I was ill.' Sophie Collins (SC) - 'It’s funny because I think those collage-like poems are perhaps the ones that appeal most to me, and I wonder if this has something to do with the disparity between the writing and translation processes… Either way, ‘The Following Scan Will Last Less Than a Minute’, which appeared recently in The London Review of Books, is among my favourites in the book. I admire its frankness, its temporal leaps and the way it gives off a sense of affective deferment even as it describes the extremes of human experience.'

In the book, you cite Audre Lorde's The Cancer Journals (Sheba Feminist Publishers, 1985) and Susan Sontag's Illness as Metaphor and AIDS and Its Metaphors (Penguin, 2002) which discuss experiences of cancer and try to demystify myths and openly discuss perceptions of the illness. How have these texts influenced your own experience and writing? And are there other powerful texts that have accompanied you in your journey and/or that you would like to suggest to our readers?

LM - 'Susan Sontag and Audre Lorde are two of my favourite writers, women I really look up to. I hadn't read these texts before, and reading their stories and thoughts about cancer while having to deal with it myself was somehow really comforting. It also got me back on track as a writer: when you first hear you are ill everything is sort of sucked into a void, you lose the ability to think and concentrate. These texts dragged me back into reality: hang on, cancer is something to write about just like everything else.' 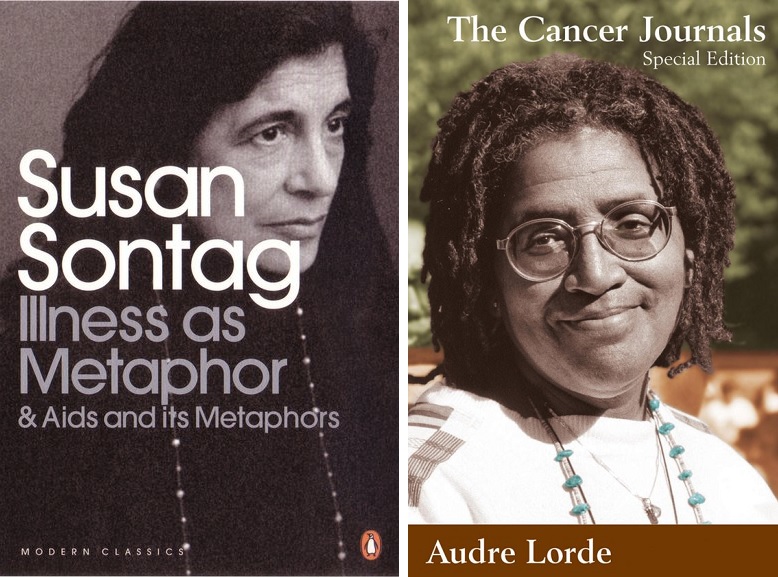 I feel that 'perception' - of life, health and illness, cancer, gender and in society, and also, as skilfully introduced, in translation - is an underlying theme in the book. Am I right, and, if so, how did the theme of personal and social perception arise and how does it interweave in the poems, reflections and letters in the book?

LM - 'Ohh this is such a hard question. Yes, you are right, being confronted with a potentially lethal disease forces you to look at your life from a distance, and then all of a sudden patterns you normally wouldn't see become clear. You stop losing yourself in the details and see the bigger picture, at least for a while. And that maybe brings about the sense of 'perception' you mention. Also, to this day I find it strange how some people react when they hear you have cancer, like all of a sudden you are in a totally different category of society.'

I think we’re simply a good author/translator match; we’re both very interested in the idea of linguistic determinism.

SC - 'I think this is definitely true of the book, but I think it’s up to the reader to determine how these questions manifest in the text! I would say, however, that in raising questions of perception in my translator’s note (my letters to Lieke) I was responding to her poems’ dimension of social critique. Of course, perceptions of translators and the translation process (and of other things too – women, shame) were a concern that predate my collaboration with Lieke. In this sense, I think we’re simply a good author/translator match; we’re both very interested in the idea of linguistic determinism.'

As the translator mentions at the end of the book, Lieke's writing entails what we can call culture-specific references, from Dutch brand and place names to measure units, but also, and most evidently, Dutch society and politics. Regarding the latter in particular, what has been the translator's approach to them? Do you believe readers of the translation will be able to draw parallels with their own country's politics and current social issues?

SC - 'I believe so. I would hope that UK readers would see the discussions of the Dutch judicial system and party politics both for their own relevance and in terms of what’s going on here in the UK regarding national healthcare and Big Pharma, benefits, right of asylum, populism and the sinister influence of multinationals on government policies and legislation. Early in the translation process, I remember Lieke expressing some doubt as to whether to include the stuff about the 2018 Dutch dividend tax enquiry (in which it was shown that the government had been granting 1.4 billion euros a year to multinationals including Shell and Unilever – on the basis of a report commissioned by Shell). But I made a case for the importance of this as a response to (what I consider to be) the chronic parochialism of UK readers; I think it’s important we’re exposed to these sorts of discussions for a whole range of reasons, including their potential to undercut reductive (and Anglocentrist) ideas of continental Western Europe as some kind of haven.

The decision to include Dutch brand and place names (rather than reckon at their UK equivalents) will elicit all kinds of mansplaining from other translators – it already has, in fact! The idea that we have done so both because it is the best thing for the translations and because it asks UK readers to recognise a foreign text as such is clearly incomprehensible to some.'

The book stands really well on its own, it doesn't even feel like a translation anymore to me.

The translator of the book is also a poet, as well as a friend of the author, as explained in the book. How does this influence the creative writing and translation process in general terms and how has this helped to shape the book?

LM - 'For me it made me feel much more at ease, I've had a few bad experiences with translators in the past, but knowing Sophie and knowing she is a great poet herself, I felt my work was safe with her. This also allowed me to grant her more freedom in the translation process, and I think it has helped create a book that stands really well on its own, it doesn't even feel like a translation anymore to me.'

Would you like to recommend any other poetry in translation books to our readers? LM - 'I'm afraid I can't! 'Cause Dutch poetry I read in Dutch so I don't know about the translations.'

SC - 'And I’m afraid I’m going to take this opportunity to shamelessly plug our next project: my translation of Lieke’s novel, Het tegenovergestelde van een mens or, in my English translation, The Opposite of a Person. It’s about climate change and loneliness. We’re currently preparing a sample to send out to publishers.' 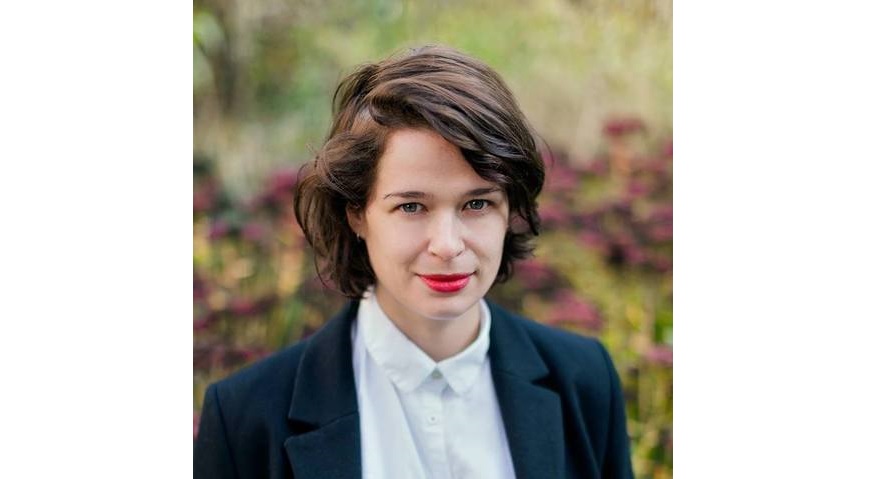 is the author of two full-length collections of poetry, Wat ik mijzelf graag voorhoud (Things I Tell Myself) and De eerste letter (The First Letter); for which she has received several awards, including the C. Buddingh' Award and the Van der Hoogt Prize. Her first novel, Het tegenovergestelde van een mens (The Opposite of a Person), which incorporates poetry and non-fiction to address questions of climate change and loneliness, was published in 2017 by Atlas Contact.

grew up in Bergen, North Holland, and now lives in Edinburgh. small white monkeys, a text on self-expression, self-help and shame, was published by Book Works in 2017 as part of a commissioned residency at Glasgow Women's Library. Her first collection of poems, Who Is Mary Sue?, was published by Faber & Faber in 2018 and the PBS Spring 2018 Choice.

The decision to include Dutch brand and place names (rather than reckon at their UK equivalents) will elicit all kinds of mansplaining from other translators – it already has, in fact!

All weblogs by Poetry Book Society

The Poetry Book Society (PBS), set up by T. S. Eliot and friends in 1953 ‘to propagate the art of poetry’, is a unique poetry book club, delivering the best new poetry to their members, alongside a Bulletin, a poetry magazine, reviews and discounts. PBS also offers a translation membership, for poetry in translation fans. Every quarter, their expert selector George Szirtes chooses his favourite poetry in translation book. PBS Translation Members receive Szirtes’ quarterly Translation Choice, alongside their Bulletin. The Following Scan Will Last Five Minutes by Lieke Marsman is the PBS Summer 2019 Translation Choice.