Flemish author Bart Moeyaert is the laureate of the Astrid Lindgren Memorial Award 2019, the ‘Nobel Prize for youth literature’. The award, which amounts to 5 million Swedish Kronor (€ 480,000) is given annually by the Swedish Arts Council. Moeyaert was nominated for the sixteenth time this year, and finally received the prestigious prize at the Bologna’s Children’s Book Fair.

An expert jury selected Moeyaert from a long list of nominees from more than 60 different countries.

Bart Moeyaert’s condensed and musical language vibrates with suppressed emotions and unspoken desires. He portrays relationships at crisis point with a cinematic immediacy, even as his complex narratives suggest new ways forward. Bart Moeyaert’s luminous work underscores the fact that books for children and young people have a self-evident place in world literature. — The jury

Bart Moeyaert was born in 1964 and lives in Antwerp, Belgium. He made his debut at age 19 with the award-winning novel Duet met valse noten (1983). His large and diverse body of work includes more than 50 titles, ranging from picture books and YA novels to poetry. His critically acclaimed books have been translated in more than 20 countries. He also writes television screenplays and stage plays, has translated a number of novels, and teaches creative writing. In 2016 he was the artistic director of the Dutch-Flemish guest of honours programme at the Frankfurt Book Fair.

The Astrid Lindgren Memorial Award will be presented by H.R.H. Crown Princess Victoria in a ceremony at the Stockholm Concert Hall on 27 May 2019. 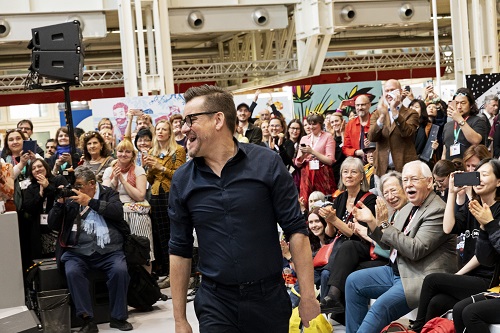