Graphic novelist Typex will travel to Spain to perform at Comic Barcelona. Typex will be participating in various events during his stay: press conferences, panel discussions, workshops, meeting with fans and signing sessions of his book Andy. The Life and Times of Andy Warhol at the publisher’s stand (Penguin Random House Grupo Editorial).

Comic Barcelona is an annual event of reference in the world of comics in Spain, aimed at both professionals and the general public, showcasing comics, graphic novels, manga and animation.

Typex (b. 1962) is a Dutch comic book artist and illustrator. He has been active in the comics world since 1982. His first work appeared in the underground magazine De Balloen and in various children’s magazines. For the magazine Zone 5300, he developed the cartoon De Belevenissen van Moortje Poes (The Adventures of Moortje the Cat). In 1996, he published Melkman (Milkman) which echoed Max & Moritz. A football comic followed in 2004, De nieuwe avonturen van Kick Wilstra (The New Adventures of Kick Wilstra). He also published his own magazine Chorizo for a while. In 2013 his graphic novel Rembrandt was published to widespread acclaim and has since been translated into eight languages. In 2018 his graphic novel biography of Andy Warhol was published. In January 2019 he was awarded the Stripschap Prize, the annual Dutch oeuvre award for cartoonists. 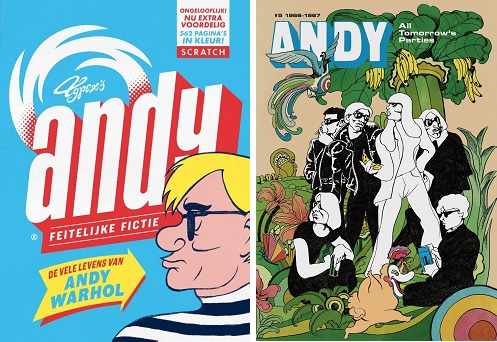