From 11-14 March Barbara den Ouden, Victor Schiferli, Mireille Berman, Agnes Vogt, Bas Pauw and Alexandra Koch will represent the Dutch Foundation for Literature at the London Book Fair (table 34V at the International Rights Center). They will have meetings with approximately 125 international publishers and editors to promote Dutch literature.

A selection of new Dutch fiction and non-fiction will be presented in the two new brochures: Ten Books from Holland and Quality Non-Fiction from Holland. In addition the bilingual anthology of Frisian literature, Swallows and Floating Horses (Francis Boutle Publishing) will be presented on Monday 11 March at University College London with readings in Frisian and English presented by the translators David Colmer, Michele Hutchinson, David McKay, Jantsje Post and Jetske Bilker. One of the guests will be Frisian poet and Dutch poet laureate Tsead Bruinja. 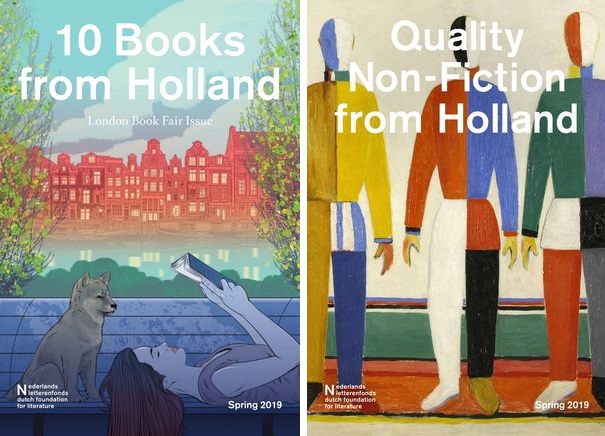 On Thursday March 14th, Dutch authors Karin Amatmoekrim, Mano Bouzamour and Johan Fretz will read from their work and discuss questions of who we are, where we belong and how we fit in. Does your identity determine how you think or how you should think? This literature/debate evening is a collaboration between the Dutch Centre and the University of Sheffield and supported by the Embassy of the Netherlands. The event has been curated by students in their final year from the University of Sheffield and is moderated by Henriette Louwerse.

The Dutch Foundation for Literature is organizing a large-scale campaign in the UK in 2020 to promote Dutch literature on the English market. The campaign started last autumn with four fellowships for British and American publishers of fiction, non-fiction, poetry and children's and youth literature. The focus on the English market succeeds successful campaigns in Germany and France. 'In the past ten years we have focused on emerging markets such as Brazil, China and the Arab world', Bas Pauw explains in an article in Boekblad. 'Then we returned to the big European home markets. England is a difficult but very important market because our authors can potentially tap into a very large audience there. England offers a very prominent stage in the international literary world.' The past few years, Dutch literature has known a few big successes in the English-speaking world: The Evenings by Gerard Reve in 2016 ('a masterpiece, translated at long last', An Untouched House by W.F. Hermans last summer and Tonke Dragt's children's classic The Letter for the King, which is currently being adapted as a Netflix series.