The BookSpot Gouden Strop (Golden Noose) 2018 has been awarded to Willem Asman for his book Enter (Ambo | Anthos) by jury chairman Anniko van Santen. The Shadow Prize went to Eva Keuris for her debut Over het spoor. Willem Asman wrote Enter with a scholarship from the Dutch Foundation for Literature. Thanks to the new sponsor BookSpot, the Gouden Strop is worth an amount of € 20,000 this year.

The jury praised the web of plot lines in Enter: “Asman writes at a pace that lets you gasp for breath, but in a style and design that makes it almost impossible to put the book aside. He has a touch of refined humour. With just a few spot-on sentences, Asman knows how to evoke well-balanced characters and to conjure up atmospheres. The loneliness of the protagonist is almost suffocatingly realistic.”

Enter is the first part of the Rebound-trilogy by Willem Asman; parts II & III, Error and Exit have been published recently by Ambo Anthos.

The award ceremony was the kick-off for the thriller campaign (Spannende Boeken Weken), which runs until 24 June in bookstores throughout the Netherlands.

More information on Willem Asman may be found in our Authors database. 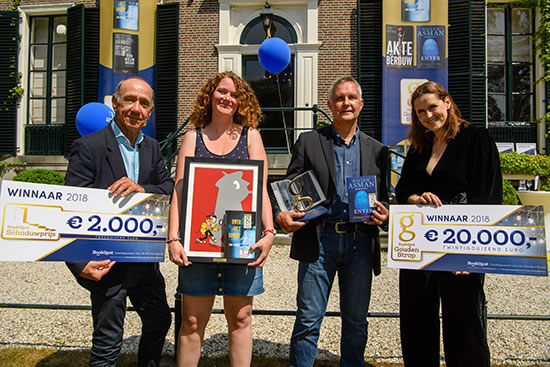