Esther Gerritsen, Ernest van der Kwast, and Karolien Berkvens are just a few of the authors that will be giving a talk in the Dutch-Flemish stand in hall 4, booth C303. In the Atelier Parade, Dutch and Flemish artists will be illustrating memorable quotes from literature and philosophy. Silk screen prints of these will be made on the spot to be handed out to the audience. The attending illustrators and graphic novelists are Jeroen Funke, Anne Stalinski, Charlotte Dumortier and Wasco. 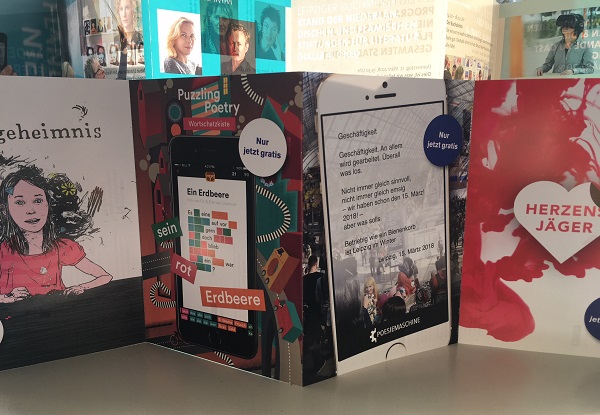 This year’s program has a special focus on digital literature. For instance, you may engage in a literary date with the app Hartenjager by Arnon Grunberg, or play with words in the brand new junior edition of the app Puzzling Poetry: Woordenschatkist. This game includes poetry by children’s authors Ted van Lieshout, Joke van Leeuwen, and Bart Moeyaert, and challenges children to think about the position of words and rhythm of a poem, leading to a more concentrated way of reading.

The program in Leipzig is part of the follow-up campaign This is what we share 2017-2018, organized by the Dutch and Flemish foundations for literature. In the fall of 2017, Dutch and Flemish authors were in the spotlight at Berlin’s International Literature Festival and at during Stadt Land Buch, a regional literay festival in Berlin, Potsdam and surroundings. Later this year similar programs will take place at the Harbourfront Festival in Hamburg and children’s and youth literature in Munich.

More information on the aforementioned Dutch and Flemish authors: