Dutch poet Alfred Schaffer has been awarded the Charlotte Köhler Prize for Mens Dier Ding (Man Animal Thing). This poetry collection met with instant acclaim: it was nominated for the VSB Poetry Prize 2015 and awarded the Awater Poetry Prize 2014, the Paul Snoekprijs 2016, and now the Charlotte Köhler Prize - worth 15.000 euro. A French translation is in preparation. Alfred Schaffer (1973) is currently based in South-Africa, where he works as a lecturer at Stellenbosch University.

Mens Dier Ding tells the history of nineteenth-century South-African army leader Shaka Zoeloe and the ways in which he has been perceived through time. ‘This poetry is raw, strikingly sincere, horribly silly’, according to the jury. ‘Its political commitment is constantly being put under pressure by an ironic tone, a play with countless poetic and even non-poetic verse forms.’

The Charlotte Köhler Prize is a triennual award for an author that has written high quality prose, poetry or drama. Both the prize and the stipendium are awarded in switching genres; this year: poetry and youth literature. Both prizes will be awarded on Friday 8 December in Amsterdam. 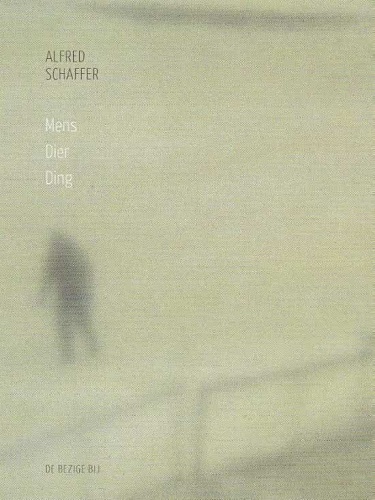 I’d been home maybe an hour
when I slipped out again.
Not long before the sun would set
I walked up the road to the woods behind the railway line
and the football pitches, carrying my homemade spear.
Its point a dreadful screech.
They said a dog had got out
some rare breed, jet black as a sermon,
the froth that was on its jaws.
Barking to stay ahead of the darkness
I fl itted after my shadow between the trees
until a solid curtain was ripped away.
Something was there, half-buried under a few leaves and sand.
I raised my spear, took a step forwards and froze.
As though I had suddenly forfeited the right to speak –
my T-shirt stuck to my body
the prism of my skin was like a flickering dream
For a short time I emitted light
and then I was put out.