6 Dutch language novels on the 2018 longlist

Dutch authors Herman Koch, Ilja Leonard Pfeijffer, Tommy Wieringa and their translators Sam Garrett (Koch and Wieringa) and Michele Hutchison (Pfeijffer) have been nominated for the longlist of the International Dublin Literary Award, with €100,000 the world’s most valuable annual literary prize for a single work of fiction published in English.

A total of 6 novels translated from Dutch, 3 from the Netherlands and 3 from Flanders, are among 48 novels in translation that have been nominated by libraries worldwide for the longlist of the International Dublin Literary Award.

The Dutch language titles on the 2018 longlist are:

The books were nominated by libraries in Amsterdam, Eindhoven, Rotterdam, The Hague and Utrecht in The Netherlands; libraries in Bruges, Brussels and Ghent in Belgium and libraries in Zurich, Switzerland and Waterford, Ireland.

Dutch author Gerbrand Bakker won the prize in 2010 for his novel The Twin, translated by David Colmer.

The full list of 150 titles is available on www.dublinliteraryaward.ie. The shortlist will be published in April 2018 and the Lord Mayor will announce the winner on 13th June. 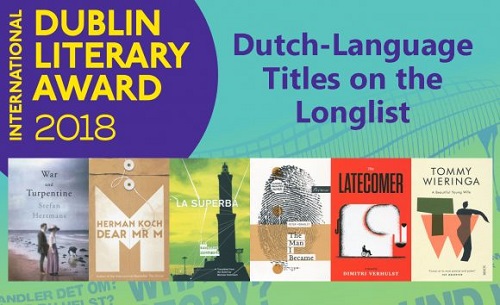