Having become almost world famous with his graphic novel Rembrandt, Typex is now working on a new book, on one of his inspirations as an artist: Andy Warhol. Last year he traveled twice to the U.S.A. to talk with the Andy Warhol Foundation and to do research for this biographical project. First to Pittsburgh, and later to New York, following the chronology of Warhol’s life. Both travels were supported financially by the Dutch Foundation for Literature. Below a snippet of Typex’ travel diaries, a travelogue in drawings, photos and text. 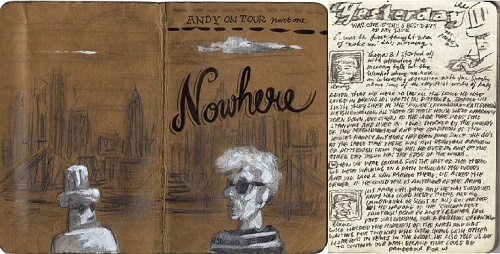 “’Yesterday was one of the 5 best days of my life’”, was the first thought when I woke up this morning. Thomas & I started off with attending the morning talk at the Warhol Museum where we had an interesting discussion with the speaker about some of the very first works of Andy. After that we went to see all the houses he had lived in during his youth in Pittsburgh. Before his sixth they lived in the ‘Hunkie’ (Hungarian = East-European) neighbourhood. All three of these houses were apparently torn-down but others of the same time were still standing and lived in. I was shocked by the poverty of the neighborhood and the condition of the houses – hardly anything had been done since the 40’s. At the same time there was this beautiful overview of Pittsburgh from the hill he lived on and on the other end there was the edge of the woods. 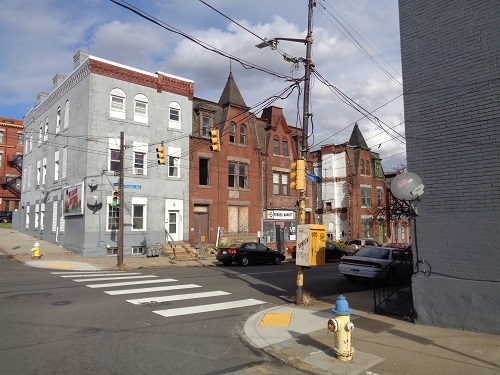 When we were looking for the last of the three we were walking on a path through the woods and we saw a van parked there. We asked the driver if he could tell us anything about the area. His name was Dave and he was surprised Andy had lived here (there are no landmarks or signs at all) but he told me he had one of the ‘chicken feet paintings’ done by Andy’s brother Paul. Dave was working for a religious organization who helped the homeless of the area and was waiting for two kids who were living with other homeless in tents in the woods. He also told us not to continue our path because that could be dangerous for us.” 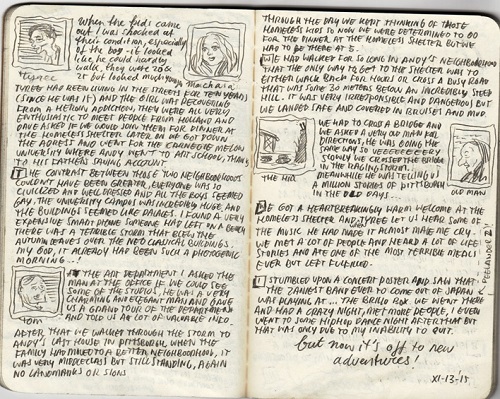 When the kids came out I was shocked to see their condition, especially of the boy – it looked like he could hardly walk, they were 20 & 25 but looked much younger. Tyree had been living in the streets for ten years (since he was 15) and the girl was recovering from a heroin addiction. They were all very enthusiastic to meet people from Holland and Dave asked if we would join them for dinner at the homeless shelter later on. We wrote down the address and went for the Carnegie Mellon University where Andy went to Art School, thanks to his fathers saving account.

At the Art Department I asked the man at the office if we could see some of the studios, he was a very charming and elegant man and gave us a grand tour of the department and told us a lot of valuable info. After that we walked through the storm to Andy’s last house in Pittsburgh, when the family had moved to a better neighbourhood. It was very middleclass but still standing, again no landmarks or signs.

Through the day we kept thinking of those homeless kids so now we were determined to go for the dinner at the homeless shelter but we had to be there at 5. We got a heartbreakingly warm welcome at the homeless shelter and Tyree let us hear some of the music he had made, it almost made me cry. We met a lot of people and heard a lot of life stories and ate one of the most terrible meals ever but left fulfilled. 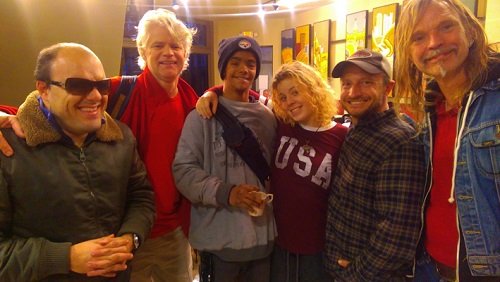 I stumbled upon a concert poster and saw that the zaniest band ever to come out of Japan was playing at …The Brillo Box. We went there and had a crazy night, met more people, I even went to some hiphop dance night after that but that was only due to my inability to quit. But now it’s off to new adventures!” 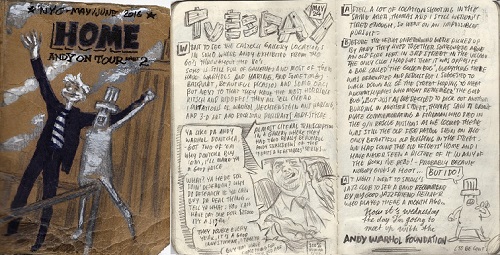 “Went to see the Castelli gallery locations in SOHO where Andy exhibited from the 60’s throughout the 80’s. SOHO is still full of galleries and most of them have Warhols and Haring and sometimes Basquiat, beautiful Picasso’s and some Dali but next to that they have the most horrible kitsch and rip-offs! They all sell cheap imitations of Warhol, Liechtenstein and Haring, and 3-D art and rockstar portraits Andy-style. After a lot of location shooting in the same area, Thomas and I still weren’t tired enough, so went on an impossible pursuit.

Before The Velvet Underground were picked up by Andy they lived together somewhere above an old fire department in 3rd street in The Village. The only clue we had was that it was opposite a bar called ‘The Golden Bug’, everything there was renovated and rebuilt but I suggested to walk down all of the street hoping to meet ancient hippies who might remember ‘the gold bug’, but just as we decided to pick out another building in another street, Thomas saw a bronze plate commemorating a fireman who died in 9/11 rescue missions as we looked there was still the old fire patrol sign on the only beautiful old building in the street. We had found the old Velvets’ home and I have never seen a picture of it in any of the books I’ve read! – probably because nobody gives a hoot… But I do! 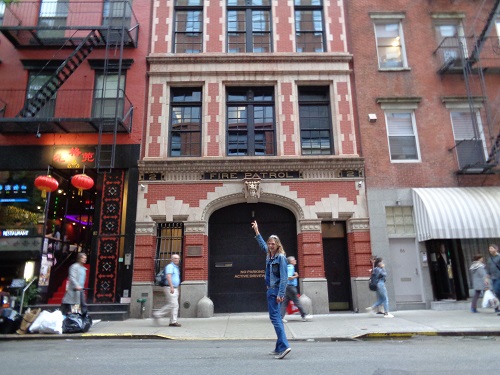 At night we went to Small’s Jazz Club to see band recommended by my good jazz friend Reinier who played there a month ago… Now it’s Wednesday the day I’m going to meet up with the ANDY WARHOL FOUNDATION.” 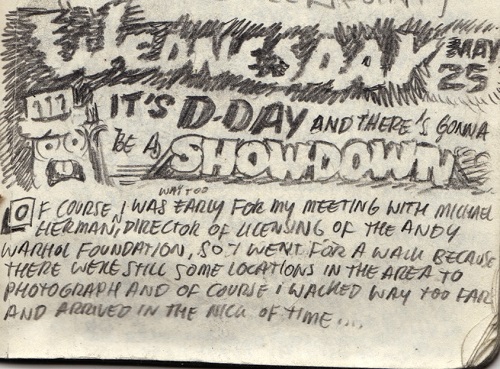 “Of course, I was (way too) early for my meeting with Michael Hermann, Director of Licensing of the Andy Warhol Foundation, so I went for a walk because there were still some locations in the area to photograph and of course I walked way too far and arrived in the nick of time…” 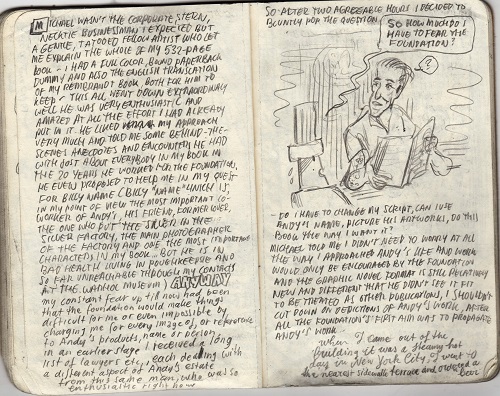 “My constant fear up till now had been that the Foundation would make things difficult for me or even impossible by charging me for every image of, or reference to Andy’s products, name or person. In an earlier stage I received a long list of lawyers etc. each dealing with a different aspect of Andy’s estate. From this same man, who was so enthusiastic right now.

So after two agreeable hours I decided to bluntly pop the question:
- So how much do I have to fear the Foundation? - ? - Do I have to change my script, can I use Andy’s name, picture his artworks, do this book the way I want it? Michael told me I didn’t need to worry at all. The way I approached Andy’s life and work would only be encouraged by the Foundation and the graphic novel format is relatively new and different so that he didn’t see it fit to be treated as other publications, I shouldn’t cut down on depictions of Andy’s work, after all the Foundation’s first aim was to propagate Andy’s work.

When I came out of the building it was a steamy hot day in New York City. I went to the nearest sidewalk terrace and ordered a beer.” 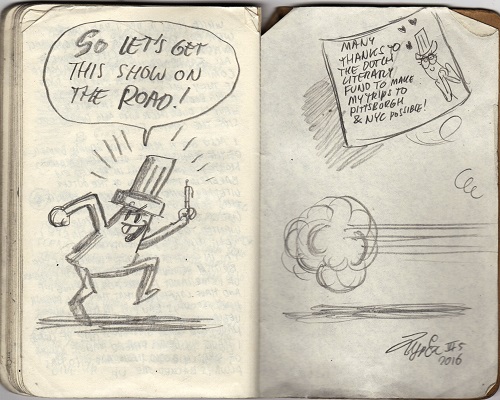 All weblogs by Typex

Typex (b. 1962) has been active in the comics world since 1982. He works as an illustrator for VPRO, OOR, Vrij Nederland, Intermediair, NRC, de Volkskrant and De Filmkrant. His first work appeared in the underground magazine De Balloen. For comic magazine Zone 5300, he developed the cartoon De Belevenissen van Moortje Poes (The Adventures of Moortje the Cat). In 1996, he published Melkman (Milkman) which echoed Max & Moritz. A football comic followed in 2004, De nieuwe avonturen van Kick Wilstra (The New Adventures of Kick Wilstra). He also published his own magazine Chorizo for a while. His graphic novel Rembrandt, a personal biographical portrait of the famous Dutch painter Rembrandt van Rijn, was published in close collaboration with the Rijksmuseum in Amsterdam. The book has been translated into English, French, Hungarian, Korean and Spanish. Turkish and Chines editions are on the way. Typex is currently working on his next graphic novel about Andy Warhol (1928-1987). See also our Authors database.

See all weblogs by Typex