Guest of honour programme kicks off in Germany, coinciding with the opening of Dutch Book Week

Appearances today, 10 March, by Saskia de Coster and Connie Palmen at the literary festival lit.Cologne mark the start of an extensive range of literary programmes presenting the Netherlands and Flanders as joint guest of honour at the Frankfurt Book Fair. In total more than 120 Flemish and Dutch authors will make appearances in seven German cities. The kick-off in Cologne coincides with the opening of Book Week in the Netherlands.

During lit.Cologne (10 through 19 March), many other big names will be appearing, including Cees Nooteboom, Anna Woltz and Jan Paul Schutten. Meanwhile, on 16 March a literary evening will be held in Berlin with Yves Petry, Lot Vekemans, Saskia de Coster and Murat Isik. 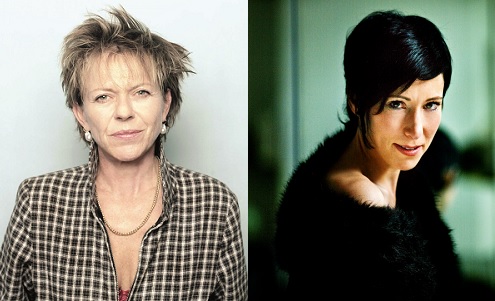 The presentation by the Netherlands and Flanders as guests of honour at Frankfurt is being organized by the Dutch Foundation for Literature and the Flemish Literature Fund. At the invitation of both foundations some ten German authors are working as writers in residence in Amsterdam or Brussels this year. Two of them, Karen Köhler (b. 1974) and Mirna Funk (b. 1981) are also participating in the Book Week tour, ensuring an interesting interchange between the two language areas. Book Week 2016, organized by the CPNB, has ‘Germany’ as its theme.

After Cologne the Guest of Honour programme will sail on to Leipzig. Many Dutch authors, poets, illustrators and writers of graphic novels will attend the Leipzig Book Fair and Leipzig Liest, including Leon de Winter and Yves Petry, who will open the programme of the Leipzig Book Fair on 17 March. Also in Leipzig, poet Micha Hamel and artist Demian Albers will present a Virtual Reality installation. The final evening of this readers’ festival coincides with the conclusion of Book Week on 19 March, during the Book Ball for Readers, organized by Literary Production House Wintertuin.

Among the many events that will follow the literary programmes in Cologne and Leipzig are the International Children’s and Young Adults’ Book Weeks in Cologne (May), the Berlin Poetry Festival and Das mag Lesefest in Berlin (June), the Harbour Front Literary Festival in Hamburg (September) and – of course – Frankfurt, where from 18 to 23 October 2016 the Frankfurt Book Fair will take place. All the literary genres are represented there: fiction and non-fiction, poetry, literature for children and young people, and the graphic novel. A total of more than 145 literary events are planned for Germany this year. In addition there is a programme that will focus on the fine arts, film, the performing arts, and the creative industries in the Netherlands and Flanders.