Four (young) authors from the Netherlands and Flanders, Niña Weijers, Bregje Hofstede, Lize Spit and Saskia de Coster have been invited as writers-in-residence at the Literarisches Colloquium Berlin (LCB), one of the more prominent literary institutes in Germany. The authors have been invited by the LCB in the context of the host country programme that the Netherlands and Flanders will organize at the Frankfurter Buchmesse in Germany this year. Their residency in June 2016 coincides with the Das Mag Lesefest in Berlin.

The German translation (by Isabel Hessel) of De Coster’s novel Wij en ik, named Wir & ich, has recently been published by Tropen Verlag. Last year, the German translation (by Heike Baryga) of Bregje Hofstede’s debut novel Der Himmel über Paris was published by C.H. Beck. The debut novels by Niña Weijers and Lize Spit will be translated into German as well. Lize Spit´s Het smelt has just been sold to S. Fischer Verlag and Niña Weijers’ Die Konsequenzen (translated by Helga van Beuningen) will be published by Suhrkamp in August of 2016. 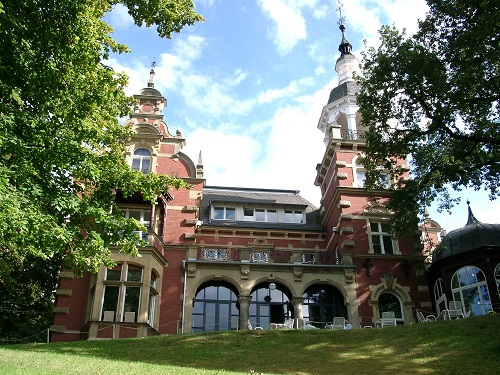 Niña Weijers (1987) studied literary science at the Universities of Amsterdam and Dublin. She has published short stories and essays in various magazines, and won writing competition Write Now! in 2010. She also writes for De Groene Amsterdammer, is an editor for De Gids and together with Simone van Saarloos creates a talkshow: Weijers & Van Saarloos. Her debut novel De consequentieswas published in May 2014 by Atlas Contact. It did not only win the Anton Wachterprijs 2014, but was also crowned with the prestigious public’s choice award of the Gouden Boekenuil 2015. It made the shortlist of the Libris Literatuurprijs 2015 as well. The translation rights have been sold to France (Actes Sud), Germany (Suhrkamp Verlag), the United States of America (Doppelhouse Press), and the Czech Republic (Kniha Zlín). In 2015, on the basis of her debut novel Weijers was selected as one of eight gifted promising debutants to receive a starting grant by the Dutch Foundation for Literature.

Bregje Hofstede(1988) is a writer and art historian. Ze has published short stories and essays in among others Das Magazin, De Gids, Tirade, Hollands Maandblad and Kunstschrift. For those publications she received the Hollands Maandblad encouragement grant in 2012. Two years later, in 2014, her debut novel De hemel boven Parijs followed. It was published by Cossee and was nominated for the longlist of the Gouden Boekenuil and the Libris Literatuurprijs. As well as Niña Weijers, based on her debut novel, Bregje was selected by the Dutch Foundation for Literature as one of eight promising debutants to receive a starting grant in 2015.

Lize Spit(1988) grew up in Viersel, a small village in Belgium, and has been living in Brussels since 2005. She acquired her Master Scenario degree at the Royal Institute for Theatre, Cinema and Sound in Brussels and furthermore writes fiction and poetry. Among other things she has published in magazines Het Liegend Konijn, De Gids and Das Magazin. In 2013 she won both the public’s choice and the jury’s choice award of Write Now!. Lize teaches courses on scenario writing at Wisper and is a frequent visiting lecturer Writing at the LUCA School Of Arts in Brussel. In January of this year she made her debut with the wildly successful novel Het Smelt, whereof the translation rights have been sold to Denmark, Norway (Cappelen Damm) and Spain (Planeta).

Saskia de Coster’s (1976) first words as a child were probably something along the lines of: “Hand me a pencil so I can finally write my novel”. At only eleven years old she won a national writing competition in Flanders and when she was around twenty years old she presented installations and artfilms in various art galleries. After graduating from the Université de Louvain in Leuven, Belgium, her debut novel arrived. It was published in 2002 with the name Vrije Val. Following that were five other novels, where her last novel, Wij en ik¸ became a bestseller. It also won the Cutting Edge Award and was nominated fort he BNG Nieuwe Literatuurprijs, De Gouden Uil, the ECI Literatuurprijs and the Libris Literatuurprijs.

The LCB generally offers a residency to between five and eight authors. The guesthouses are open for both German and international writers and translators. Formerly among others Teju Cole, Swetlana Alexijewitsch and Laksmi Pamnutjak stayed as writer-in-residence in Berlin.