On Friday 12 December 2015 Edgar de Bruin was awarded the Dutch Foundation for Literature’s Translation Prize for the translator as cultural ambassador. His oeuvre demonstrates his sharp eye for modern Czech literature; he has introduced writers including Petra Hůlová, Jáchym Topol, Patrik Ouředník and Markéta Pilatová to a Dutch readership.

Edgar de Bruin (b. 1958) studied Czech at the University of Amsterdam and the Charles University in Prague and has been active as a translator since 1993. Together with his wife Madla Hüblová he runs the literary agency Pluh (plough).

As well as short stories, poetry and plays, De Bruin has translated some fifty novels. The titles he chooses himself could often be described as experimental and audacious, and they are rarely easy to translate. He renders them in Dutch with great creativity, losing none of their frequent changes in register, their humour and irony.

For publishing house Voetnoot he edited the Moldaviet series, made up of modern gems fished out of the Vltava. For nine of the twenty-four books in the series he was responsible for an afterword or interview as well as the translation. De Bruin has taught at the VertalersVakschool in Amsterdam. All this goes to show that as well as a translator he is a true cultural entrepreneur and devoted to ‘his’ authors.

Edgar de Bruin won the Aleida Schot Prize for his translation Spoelen met teerzeep by Jáchym Topol. In 2007 the Czech Writers’ Guild awarded him the Premia Bohemica for services to Czech literature. 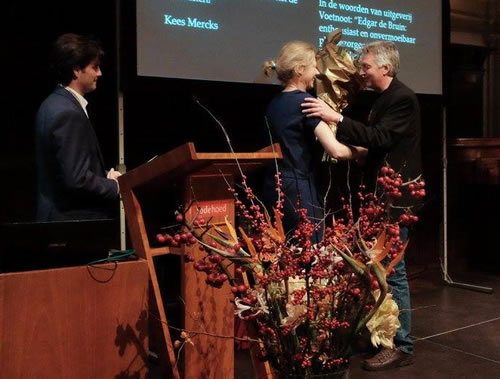 "There are few people to whom contemporary Czech literature can be as grateful as to Edgar. He is a brilliant translator, a capable agent and last but not least my friend. Edgar, we are so lucky to have you!" - Petra Hůlová, author

"Edgar, warm congratulations on behalf of the Czech department of the University of Amsterdam and on behalf of myself personally. It looks as if the pupil is going to outstrip his master. Success with the moderns!" - Kees Mercks

"I am truly glad that Edgar de Bruin with his Agency Pluh has got noticed by the Dutch Foundation for Literature, appreciated for his constant and hard work and his honest passion for Czech literature." - Milena Oda, translator Czech-German.