Dancing on the Volcano

A brilliant graphic novel about the many different sides of love

Dancing on the Volcano is a dramatic and original story of gay relationships that can easily hold its own with graphic novels like Howard Cruse’s Stuck Rubber Baby or Alison Bechdel’s Dykes To Watch Out For.

Floor de Goede portrays a young gay man’s love life in three episodes. In part one, Sander and Flo travel to the Aeolian Islands in Italy. They are just good friends; Flo’s own partner Bas stays behind in Amsterdam. Soon the irritation arises between the two, who differ in every way. Sander wants to dine out; Flo is happy to just grab some fast food. Sander wants to climb the mountain; Flo trails after him, sweating. But at the summit the heavens open up for Flo: he’s got a signal! He can call his lover at home.

In part two Flo returns home, but there is no fond reunion. As the men lie in bed together, their thoughts are with a third man, Tom, who is staying with them for a while. They try to keep their relationship alive but are unable to get their guest out of their minds. The clever thing about this scenario is the way De Goede uses a sofa and a bed as the two pieces of scenery in an almost theatrical depiction of the triangular relationship: sophistication by the simplest of means.

In part three Flo travels to New York to visit his sister and to go out with the tireless Jasper, who works his way through one lover after another. Bas is at home now, but not as alone as Flo thinks. While Flo fights temptation under the strobe lights of an American disco, Bas simply gives way. Betrayal? When he arrives home Flo asks Bas distrustfully whether he’s seen any nice-looking boys. The answer is simple: ‘Of course.’ 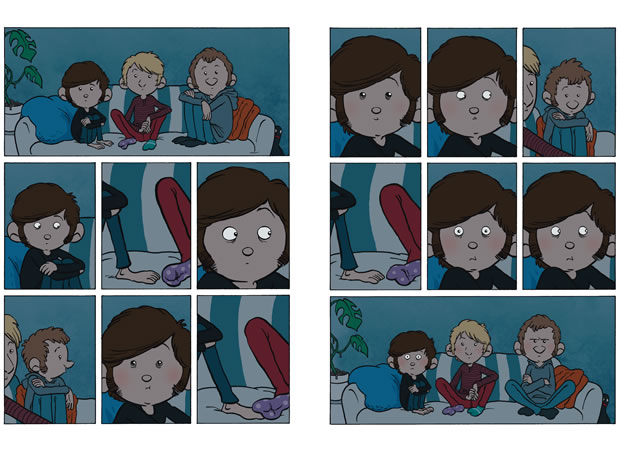 Flo reveals big themes in the smallest of gestures. Subtle but merciless. His book is moving and honest.

By the end of the book I was in love with each and every character. And especially with Flo, the sweetest grouch I know.

Floor de Goede (b. 1980) is well known as the cartoonist Flo. In 2003 he launched a daily autobiographical cartoon at doyouknowflo.nl, of which a paper version has been published. Flo, the Everyday Anxieties appeared in 2005 and was awarded the VPRO Debut Prize. He has been an illustrator of…