A gripping graphic novel about a lost childhood, masterfully painted in neon colors

Even though she’s just a teenager, Bettie has already witnessed a lot of poverty, abuse and neglect. But the discovery of an old videotape might change everything. After all, dreams of escape can help you rise above even the most toxic environments.

Ever since Bettie’s mother disappeared many years ago, she and her brother have been living with their incompetent and aggressive father. As she suffers his abuse, Bettie dreams of a way out.

Her prayers are answered when she finds an old videotape with a recording of a Dutch game­show episode. Bettie is shocked to see that her mother is one of the contestants on the show. Though the end is cut off, Bettie is convinced that her mother won the game, and that she used the money to chase her dream: moving abroad and getting rich. Bettie embarks on a journey to find her mother. In doing so, she hopes to escape her own fate as well.

Presenting a widespread issue like child abuse in such fearless, bright colors is a bold choice – and something only a skilled storyteller can pull off. Dido Drachman succeeds marvelously. Her drawings glow like neon, lighting up a young girl’s journey with optimism and hope. 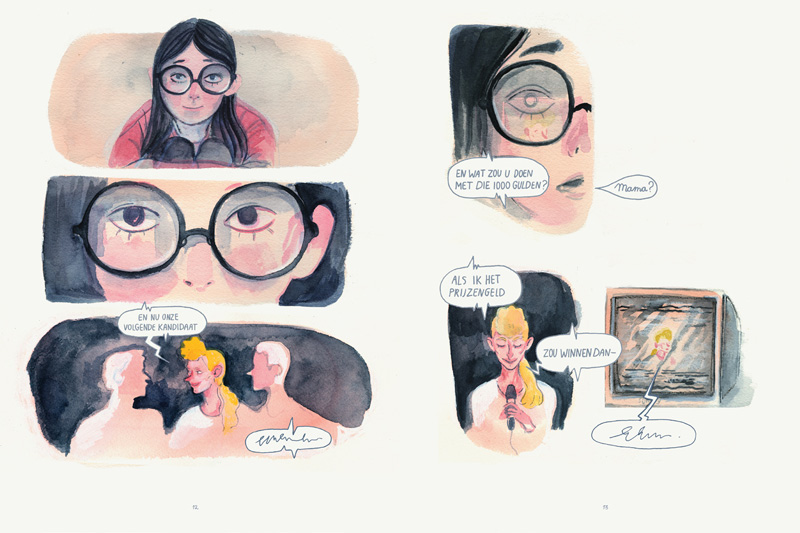 Swan Herders is a poetic book that gives a detailed account of the coming-of-age of a girl trying to escape her destiny. A subtle debut.

Dido Drachman proves that the comic book format lends itself perfectly to visual poetry. She has the talent to let her drawings float like clouds in the sky – weightless, but chock-full of emotion.

Dido Drachman (b. 1992) is one of the most exciting new talents on the Dutch comic-book scene. After earning a Bachelor’s degree in Illustration, Drachman moved to Brussels, the comic-book capital of the world. After receiving her master’s degree in Graphic Storytelling in 2019, Drachman…