The Virgin Mary hovers over a residential neighborhood, but she’s not there to protect the people

Strange things are afoot in Guido van Driel’s graphic novel, In Holland Suburbia. The backdrop is a typical new development in the Dutch suburbs, complete with family homes, tidy front yards and garages. A Beatlesesque band rehearses inside one of those garages, but things soon take a turn for the worse for them. One of the band members is found dead in the bushes; another is hit by a piece of metal that falls from the sky. UFOs are flying overhead, and the Virgin Mary is hovering up there too, as a silent witness to all the mayhem.

Guido van Driel paints his stories onto black paper with acrylics, which makes you feel like you’re inside a movie theatre, watching the action unfold. That’s no coincidence, because Van Driel is also a filmmaker with several feature films to his name. His latest, Bloody Marie, got rave reviews in the US.

Multitalented Van Driel uses his own graphic novels as storyboards for his movies, with the influence of directors such as Tarantino and David Lynch leaving a clear mark on the dialogue and events. Into this mix, Van Driel adds his fascination with unidentified flying objects – he feels people should dare to believe in miracles. In Holland Suburbia is currently being adapted into a TV series. 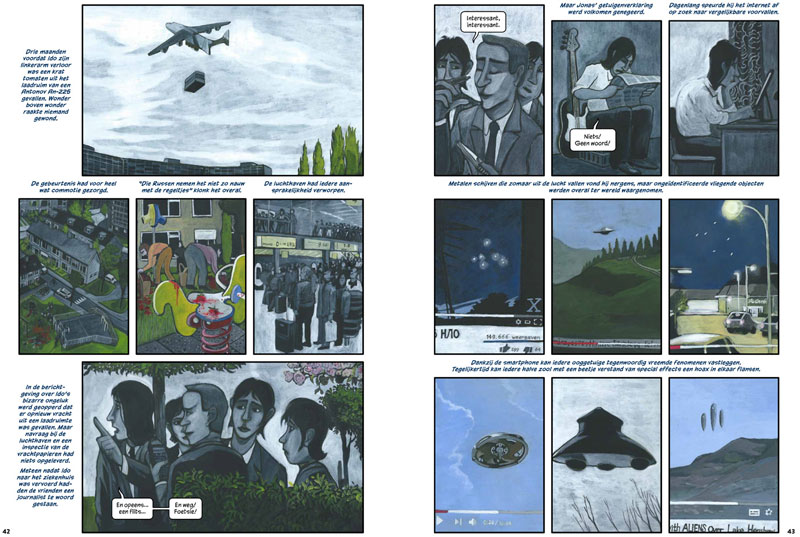 If there were a Nobel Prize for comics, In Holland Suburbia would definitely be a contender.

An exciting and intriguing story.

The recognizable, typically Dutch atmosphere in this book – in all its bourgeois splendour – combined with a series of mysterious events and plot twists, make this a wonderful pageturner that’s sure to stay with you for a while.