Hieronymus joins the recent successes of graphic biographies, such as Vincent, Rembrandt, Munch and Anne Frank

Five hundred years after the death of ‘devil maker’ Hieronymus Bosch, his modern counterpart Marcel Ruijters presents a graphic novel about the life of the Netherlands’ most famous mediaeval painter.

Hieronymus tells the story of Jeroen van Aken, a.k.a. Hieronymus Bosch, who lived in the city of Den Bosch in the Middle Ages. We see the painter with his rich clients and in church with senior clergy, the intelligentsia of the time. We also see the lives of the common people: on the street Bosch had to beat off the drunken poor with a stick, and on his way to a monastery he kept lepers away by tossing them coins. Ruijters shows such popular medieval entertainments as ‘pig-tag’, in which blind people were put in a pen with a pig, and tents in which deformed people or exotic animals were exhibited; tooth pulling was a crowd-gatherer, too.

Hieronymus Bosch’s life story starts in the Van Aken family studio, with work being produced on commission. Allart du Hameel, master builder of Den Bosch, was interested in Jeroen’s work and took him to Leuven (Louvain) but Jeroen returned, tormented by homesickness and traumatic memories of the great fire in Den Bosch, a memory he repeatedly used in his work. In Hieronymus you can almost feel the heat of the fire in Ruijters’ fabulous reds.

Back in Den Bosch, Jeroen transformed the family business into a painters’ studio. He reinterpreted traditional religious scenes, giving place to devils and demons, hence his later nickname. He began to sign his work – far from common practice in those days – and his devilish pictures brought him international fame.

No author is better suited to a drawn biography of Hieronymus Bosch than acclaimed graphic novelist Marcel Ruijters, who has been inspired before by the graphic treasures of the Middle Ages, conveying them in all their brilliance as well as their horror. Hieronymus is as ominous as that of the great master’s paintings. 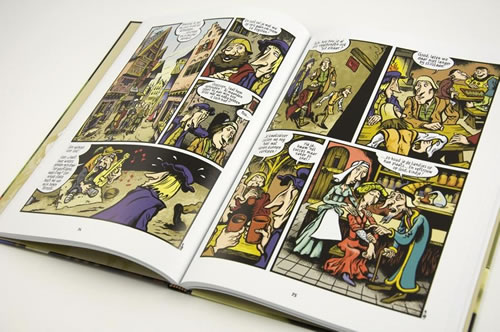 Marcel Ruijters (b. 1966) is one of the most original graphic novelists of the Low Countries. In his earlier books Thank God It’s Ugly and Troglodytes, his fondness for mysterious and malformed creatures – something shared with Hieronymus Bosch – was already evident. Ruijters made his name…