‘Police actions’ – this was the popular but misleading description given to the Dutch struggle to maintain colonial power over Indonesia. Peter van Dongen, who is himself part-Indonesian, worked on Rampokan for thirteen years (from 1992 to 2004), a monumental, two-part graphic novel in which he aims to show what it was really like.

The protagonist of Rampokan is volunteer soldier Johan Knevel, who in 1946 returns expectantly to the Dutch East Indies of his youth. However, what begins as a nostalgic adventure soon turns into an encounter with political reality, as a fierce battle for independence breaks out.

The foil for Johan Knevel is communist Erik Verhagen, a fanatical supporter of Indonesian demands for freedom. Verhagen and Knevel symbolize two irreconcilable eras: Knevel is a man of the pre-war tempo doeloe, the good old days, who feels a sense of longing for a lost paradise, while Verhagen represents the much more modern movement of the Bersiap, the violent fight for independence.

This approach allows Van Dongen to demonstrate how unworkable colonialism had become after the war, and also permits him to make fine use of the psychological tension between Knevel and Verhagen.

And there’s even more to the story than that. ‘Rampokan’ is the name of the traditional Javanese tiger fight that was held at the end of Ramadan. Within the context of this graphic novel, the tiger, which tries to escape, represents the Javanese and their fight for independence. Van Dongen employs clever montages and a great sense of suspense to weave scenes from the tiger fight into the main narrative. He keeps the colours subdued, however, using a shade of khaki to accentuate certain parts of his drawings. His sleek penmanship, in a classic ligne claire (clear line), keeps the pages bright and easy to read.

Peter van Dongen became acquainted with Indonesia through the stories told by his Chinese-Indonesian mother, but making Rampokan so vivid and authentic still required lengthy and painstaking research. All of the details are historically accurate, which meant that the University of Leiden was able to use this comic book in lessons for history teachers. Van Dongen has also given lectures on his book at Museum Bronbeek in Arnhem, which is dedicated to the colonial past of the Netherlands in the Dutch East Indies.

In comparison with the other titles out there, this book represents an artistic and narrative highpoint that far transcends the label of ‘comic’.

An unforgettable graphic novel about a piece of Dutch history that should never be forgotten.

The city and harbour views in this book are beautifully done, with all the right details. The toughness of this wartime experience has been captured uniquely by Van Dongen. 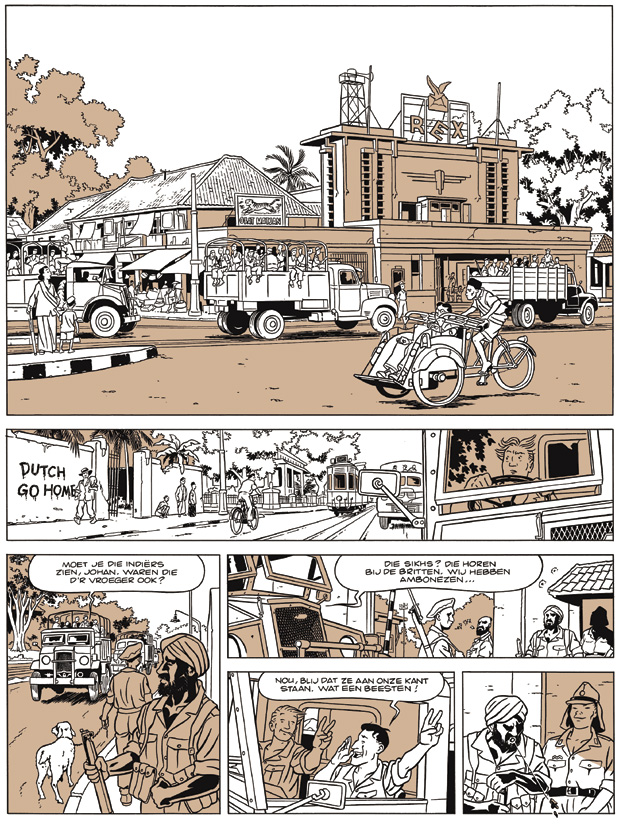 Peter van Dongen (b. 1966) trained as an advertising illustrator and made his debut at the age of sixteen. His breakthrough came with the award-winning graphic novel Muizentheater (Theatre of Mice, 1990), which followed the fortunes of two Amsterdam brothers during the depression of the 1930s and…