A walk on the wild side

Arriving in my hotel room on the Publishers Tour around Flanders and the Netherlands for ten German editors and publishers, I switched on the TV to make myself feel more at home. The Fantastic Mr. Fox was on, Wes Anderson’s great film about three well-equipped farmers’ fight against the chicken-stealing Mr. Fox, which expands into a war between the animal and the human worlds. On the side, the film tells a story about the state of civilisation, about humans on the rampage and behaving like animals, and animals driven out of their natural habitats.

Arriving in my hotel room, I had no idea the film would be programmatic for Antwerp and our Publishers Tour. Perhaps I should have realised that this intensive encounter between writers, publishers and editors outside of their usual environment – offices and desks – would naturally lead to us confronting the status quo and the state of the world, possibly intensified by the necessity, in the wake of the Paris attacks, of communicating the values and goals of our societies.

117 nationalities, at least 117 types of beer, 17 sauces for pommes frites, Muslims, Jews, Catholics, Protestants, Jains, and so on – Antwerp is a city of diversity. Even for a Berliner, 117 nationalities are an almost inconceivable number; I’m not even sure I could list that many countries off the top of my head. But Antwerp is also the mid-point between Paris and Amsterdam. The first is the site of the attack on Charlie Hebdo and the publication of Michel Houellebecq’s controversial novel Submission, the latter the former home of the murdered filmmaker van Gogh, whose film gave Houellebecq’s novel its title. In short: Antwerp is in a tense location.

One of the subjects that came up over and over in varying forms during our meetings with writers was dealing with fear. Not only in Peter Verhelst’s new novel Crashing, which addresses this very issue, as the author told us, but also in novels by Annelies Verbeke, Margot Vanderstraeten, Jeroen Theumissen and Roderik Six, dealing with confrontations with the traumas of the past, the external Other and fear of an uncontrollable nature. The Fantastic Mr. Fox is also a film about fear. Fear is an animal instinct, the film shows us, and particularly in the most advanced societies, in which all other animal instincts have been successfully supressed, fear, undetermined and unjustified, rears its head all the higher – presumably as an outlet and a symbol of a creature naturally concerned for its own survival. This fear – the film tells us – makes people behave more like animals than the animals themselves.

I would say there are two nesting places for fear in Western society – at the office and on the sofa in front of the TV; absurdly enough, the very places where any relation to our animal roots and every threat to our survival have been wiped out. And of course I rarely think about it while I’m working; I simply don’t have time. So I’m all the more grateful that the invitation to take part in the Publishers Tour gave me a chance to leave the office and the sofa, to meet new writers and talk to colleagues in rare intensity about writing, the state of the world and the state of literature. This dialogue was wonderfully supported by the creative concept, the different forms of encountering writers and publishing houses, the mix of discovering the city and discovering its literature. I especially want to emphasise the great warmth, the enthusiasm for literature and for talking about it that we’ve met so far – thanks to Lien Devos, Elise van Oosthuyse, Michiel Scharpé, Victor Schiferli!

It’s not just Antwerp’s good writers that seem to make the city the right place for thinking about how much animal is in us humans, and vice versa. On our tour around the place and its history, we come across multiple relics of this long interrelationship. 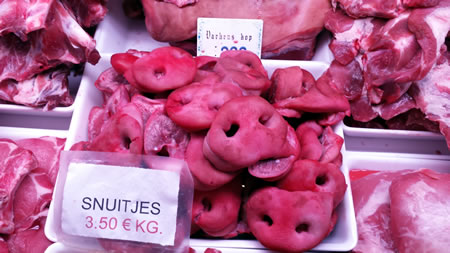 Belgium’s famous pommes frites are fried in animal fat, according to the old recipe, which makes them inedible for vegetarians. Chinatown’s supermarkets offer pigs’ snouts at the meat counters, just around the corner from the Bauhaus-style design centre. Elixir d’Anvers was invented as a horse medicine and is now enjoyed by humans. And it was in Antwerp’s harbour that Monsieur Maggi came up with the beef stock cube, perhaps one of the best images of how animals are conserved in our society.

The animals in The Fantastic Mr. Fox, having found shelter in the sewers, switch from stealing live chickens to stealing their surrogate products from the supermarket. The range on offer in the supermarket is overwhelming for the animals and the linoleum flooring bad for their paws, but they still dance for joy.

A brief utopian state, and that’s how I see myself too, at the moment, outside of my everyday office life. Only in direct encounters with the diversity of uniqueness that literature means and that – like society – can only ever be too much for me as an individual, is it possible to dance to the music that emanates from this diversity – Let’s take a walk on the wild side.

The Publishers Tour came at exactly the right moment. In the past few years, the Dutch publishing world has seen a lot of changes in terms of staff and structure. It was very helpful to view the new situation on the ground. We met publishers and publishing houses that have all learned their lesson from the “book crisis” and are now going on a new offensive, having adapted accordingly. It was extremely interesting to see how agile and creative publishing houses both large and small, from the literary Cossee to the more commercial Xander, have been in adjusting to their very specific situations and readerships.
Amsterdam is a wonderful city where tradition and innovation go hand in hand. I’m glad I have a free weekend to sort through all the books and look back on all the impressions gained. After all we’ve heard here, we’re very much looking forward to 2016’s Guest of Honour appearance. What we found out about the concept sounded more than promising.

All weblogs by Tom Müller

See all weblogs by Tom Müller