Word of thanks by Pieter Steinz

The Helena Vaz da Silva European Award for Raising Public Awareness on Cultural Heritage 2014 granted a Special Mention to Pieter Steinz for his book Made in Europe. “When I think of Europe, I think of shared culture, from Dublin to Lesbos and St. Petersburg to Lisbon: literature and art that transcends borders,” stated Pieter Steinz in a special message at the official ceremony held at the Gulbenkian Foundation in Lisbon on 3 October. Steinz, who suffers from ALS disease, was represented by his daughter Jet Steinz.

When I think of Europe, I think of Chartres Cathedral and the Sistine Chapel. I think of Shakespeare’s plays and Stravinsky’s Rite of Spring. I hear the final chorus from Bach’s St. Matthew Passion and ‘Back in the U.S.S.R.’ by the Beatles. I see Fellini’s Satyricon and the Tintin album King Ottokar’s Scepter. I think of French cuisine, Greek tragedy, German Romanticism, the Dutch Masters, Scandinavian design, the Russian novel.

When I think of Europe, I think of shared culture, from Dublin to Lesbos and St. Petersburg to Lisbon: literature and art that transcends borders. Call me a romantic. Because although I’m not the only one, most people, when they think of Europe, think of other things. Problems with the euro, for example. Bureaucracy in Brussels and needless trips to Strasbourg. Overregulation and political impotence. Open borders and “non-integrable” immigrants. Ideological differences between East and West, economic differences between North and South. In short: seemingly unbridgeable contradictions.

The disunity of Europe cannot be denied. Yet the same holds true for the cultural icons that unite her. In the art museums of St. Petersburg and Bucharest are paintings by artists whose works can also be found in the museums of London and Madrid. Beethoven and Wagner are as popular in the Baltics as they are in the Mediterranean. Dance parties in every European city unite young people of every nationality. IKEA furniture stands solidly and stolidly in the homes of Poles and Italians, Portuguese and Irish. Baroque architecture graces the cities of Slovenia and Luxemburg, Netherlands and Finland; and although it may have been called something different in every language, Art Nouveau took all of Europe by storm.

If we are to believe the Eurosceptics, nothing good ever comes from Europe; we must draw faith, hope, and shining examples from our national culture and tradition. But there is enough Pan-European cultural heritage for all Europeans to be proud of. That is what this book is about. In 104 chapters, I give an overview of the cultural icons that all Europeans share – a lively alternative to the political and economical institutions that put most people to sleep. What typically European achievements form the cultural fabric, or better yet, the cultural DNA of our continent? 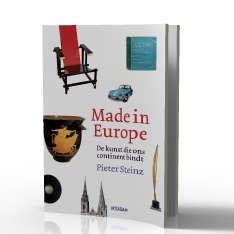 Made in Europe isn’t about politics, or religion, or science, or sports, or philosophy. There are already enough books on those topics, and what’s more, a project like that would’ve been endless. The book confines itself to the arts: classic, modern, and applied, and takes into account eight genres: architecture; visual arts (painting and sculpture); film, comic strips and photography; literature; music; theater and dance; design and fashion; diverse. Each of these genres deals with both high and low culture; that is to say, Beethoven and The Beatles, Shakespeare and the Scandi thriller, Swan Lake and ‘The Smurf Song’. Ideally, each item had to be…

…unequivocally made in Europe – ‘Europe,’ in the broadest sense of the word (including Switzerland, the Turkish east coast, and Russia west of the Urals);

…influential – or, better still, the most notable representative – of its kind;

…preferably known in all four corners of Europe.

In the past three years the search for people, works of art, movements and trends for this list of European cultural achievements has resulted in some hundred ‘icons’ – arranged rather arbitrarily, in this book, from Jacques Brel’s ‘Amsterdam’ to the Black Madonna of Częstochowa. But, as Made in Europe unfolded, it soon became clear that a selection of 104 cultural icons might raise questions. Jane Austen, but not Dickens? A whole chapter on Caravaggio and Rembrandt, but nothing about Velázquez? A close look at Picasso’s Guernica, but hardly a word about Cubism, the movement he helped make great? That would be a shame. And so I decided that in addition to each chapter I’d write a relevant entry, to fill the most important gaps (and in that way – with the help of an extensive index – turn Made in Europe into a reference work).

The resulting book was published seven months ago in the Netherlands; fifty thousand copies were sold up till now. But Made in Europe is a thoroughly European book and was meant to be published in all countries of Europe; and this,unfortunately, is hampered by the fact that is an expensive book to publish, with its 120 thousand words to translate and its 300 illustrations to reproduce. I am very grateful to the jury of the Helena Vaz da Silva Award for the special mentionthey bestowed on Made in Europe. I’m sure that this token of international appreciation will entice foreign publishers, or maybe even the European Commission, to venture a translation. So that in the years to come, everybody in Europe will be able to read about, and fully appreciate, the incredible cultural heritage of our continent. Jet Steinz (right) and José Barroso (left): “Let me take up the challenge of translation. Because the language of Europe is translation.”

All weblogs by Pieter Steinz

Pieter Steinz (1963-2016) studied History as well as English Language and Literature at the University of Amsterdam and at the University of Massachusetts in Amherst, USA. After working for several years at the History faculty of the UvA, he joined NRC Handelsblad in late 1989, where he worked as an editor in the field of art and books, and as manager of a number of editorial teams. Pieter Steinz was director of the Dutch Foundation for Literature from March 2012 to August 2013.