‘You touch me so much’

The Nanfang International Literary Festival took place in the South Chinese city of Guangzhou between 18th and 24th August 2014. Guangzhou, previously called Canton and, with 12 million citizens, one of the largest cities in China, is an unusual juxtaposition of the old and the inexorably encroaching new. The city’s rapid economic growth is visible everywhere.

Buildings that are not brand-new seem rare, and soon after you arrive your sense of what is old begins to change. After a week, even an apartment block built in the seventies provokes nostalgia. An old man walks along the motorway with a handcart and a straw hat on his head, paying no attention to the traffic roaring by.

The festival, its motto ‘Start Thinking’, takes place in a gigantic conference centre that looks like an airport. Guangzhou’s climate is subtropical, which means you’re hit by humid heat the minute you step outside. But the air conditioners in the conference halls are on at full blast, making me shiver in my summer clothes. 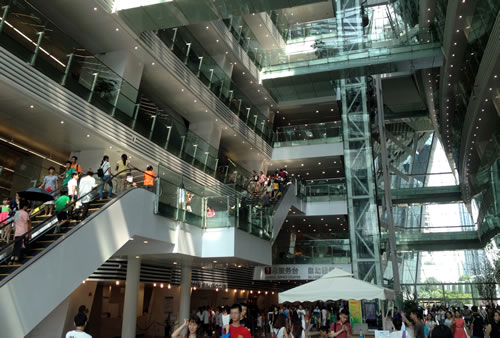 The festival attracts tens of thousands of visitors, with particularly popular Chinese authors like Nobel Prize winner Mo Yan pulling large crowds. There is also a conference about the status of Chinese literature abroad. This subject has been all the more urgent since the Chinese state has obliged publishers to sell at least fifty of their titles to foreign colleagues per year – Chinese capitalism still seems to use Communist quota. Among the foreign visitors are literary agent Toby Eady, who has been visiting China for over thirty years now; David Parrish, East Asia director of Penguin Random House; my colleague Maarten Valken, who has put much effort in the translation of Dutch fiction and non-fiction into Chinese; and Mark Leenhouts, a sinologist who – since the early days – has been the Foundation’s interpreter on its China travels. They tell the mostly young Chinese editors and authors how, in ten years time, Dutch literature has found a foothold in China with a spectacular growth of a few dozen translations in 2004 to more than 400 titles in 2014.

The festival offers a good opportunity to introduce Dutch literature to the audience. The Dutch pavilion, built for the occasion, is striking with its large posters of Miffy and historian Geert Mak. Besides, four Dutch authors have been invited to give presentations: sociologist Abram de Swaan, whose book Woorden van de wereld (Words of the World) about language diversity was published in China; Kader Abdolah, who has come to talk about his novel Huis van de moskee (House of the Mosque, translated and published in China); philosopher Jos de Mul, several of whose books on social media and the digital world have been translated into Chinese; and Jelle Reumer, an evolution biologist and director of the Rotterdam Museum of Natural History, as well as the author of De ontplofte aap – opkomst en ondergang van de mens (The Exploded Ape – The Rise and Fall of Man).

Right at the beginning of the conference, the delegation of authors gives a press conference attended by more than fifty journalists working for newspapers, radio stations, online magazines and even television stations. The reporters pose questions about Dutch literature in China and about which Chinese novels are published in The Netherlands. 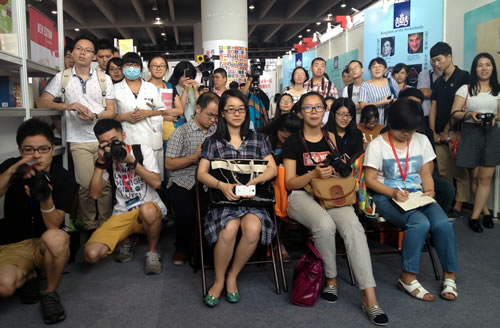 All four Dutch authors do a reading, sometimes for hundreds of people. Abram de Swaan – grey hair, neat suit – sits facing a hundred people wearing T-shirts, shorts and slippers. They look at him expectantly. ‘I have been asked,’ he begins, ‘to tell you something about myself. About who I am.’ He pauses, then says, ‘That’s a question I’ve been asking myself since I was eight years old, and I still don’t know the answer.’ The audience laughs. De Swaan continues and the audience is spellbound. His book, an analysis of the worldwide system of languages, looks at language diversity, and therefore at religious and ethnic diversity. These are sensitive issues in China, where 56 ethnic groups speak more than 80 languages. Mandarin is only one of them.

Elsewhere in the city, in the Guangzhou Museum, Jelle Reumer talks enthusiastically about the relationship between fish and birds. Afterwards he receives a hand-written note from a student. ‘Dear Doctor, thanks for your encourage – it is you that make me want to know more about paleontology. You touch me so much!’ Meanwhile, Jos de Mul gives a reading about the political and economic implications of new media. His reading is followed by a lively debate about the addictive nature of mobile phones and social media, as well as a long session of book signing.

Kader Abdolah, too, attracts a large audience. He talks about his life, about how – as a writer – he had to flee Iran and then ended up in The Netherlands, where you can write what you like. He pursues questions like: What is the meaning of freedom of speech for a writer? How does literature written in freedom develop? He describes the freedom of Dutch artists, resulting in the great variety of Dutch literature. Dutch authors can write freely about politics, about sex, about nothing. The latter seems to make a particularly big impression. You could have heard a pin drop.

We constantly wonder how much room there is for explosive subjects like this one. Our conversations with Chinese colleagues falter when someone new joins the conversation. But is that due to politeness, or fear of informants? Many of the people we meet tell us that Gangzhou is much more liberal than Beijing. ‘The mountains are high and the emperor is far away,’ they laugh. But a translator tells me that in China literature is still very much interwoven with the political power. We visit a beautiful bookshop featuring a translation of Lolita. Another bookshop, one that is open 24 hours a day, is opened that same week.

At the conference we are constantly surrounded by dozens of enthusiastic volunteers. When I have a chat with one of them, he tells me that he wants to practice his English and eventually become a businessman, grow rich and see the world. He definitely doesn’t want to work in literature. When I meet a young editor of a literary magazine later, I ask him why he has decided to devote himself to literature. He smiles shyly and says that he is an exception, that his brothers don’t understand him, but that his aunts and grandmother told him stories when he was young, and that he has loved literature ever since. Kundera, Naipaul, Burroughs, he knows them all.

In a city with a fast growing population and an overloaded road network, you spend hours in traffic jams. But it has its advantages. In the car back to the hotel I have a conversation with a girl who works at the festival. She talks about her studies, about the fact that a good education costs more money, and that her parents already pay a heavy fine for having two children. Having an extra child costs them several annual salaries. The most shocking thing, however, is that she seems to think this is normal – there’s nothing you can do about it, that’s just the way it is.

An important question is how the wild course that Chinese capitalism is steering will be kept under control and how it will be civilised. On the one hand, it is hard to imagine that all those self-conscious young people who consider themselves citizens of the world and want to be well informed will let themselves be limited by the government. But on the other hand there is no real history of democracy in China, and while repression may not be clearly visible, it is definitely there.

My first encounter with China was both exciting and confusing, probably partly due to my jetlag, which kept me awake at night. I zapped around and was amazed at the endless soaps, series on history and talent shows. From my window I could see the incredibly tall Canton Tower, the tallest building in the world but for one. Europe seemed far away, a kind of Madurodam – picturesque, safe, but insignificant.

Mireille Berman is responsible for the international promotion of non-fiction.