Translator and editor Michele Hutchison shares this funny and informative piece about her experiences at the James A. Brockway translation workshop, where a group of professional translators has been taking an in-depth look at the work of festival poet Mustafa Stitou.

Mustafa Stitou’s long-awaited new collection Tempel contains a series of poems about escaped cows. When asked about this in an interview, he explained that, for him, our relationship to cows typifies our relationship to nature. How do cows get into the psyche of a Moroccan-Dutch boy from the 1960s garden city project, Lelystad? It exactly this kind of thing that is part of his charm. On the one hand, he’s a very serious poet whose primary muse is his devout Islamic late father. On the other, he is wonderful at injecting a sense of the absurd into scenes from everyday life. His poems are mainly deceptively simple, though on occasion they can be downright complicated (e.g. ‘Tempel’, the volume’s title poem). The starting point is language rather than meaning; story and composition follow on. His work provides plenty of meat for a translator’s knife. 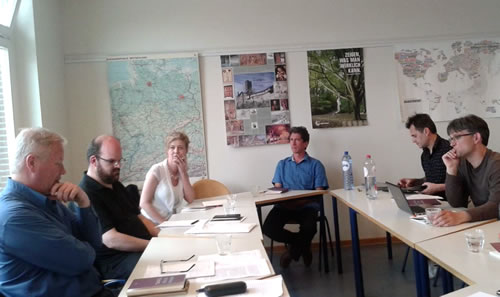 The James A. Brockway translation workshop runs at Poetry International Festival on alternate years. It allows professional poetry translators from Dutch into other languages to spend time working with each other and with the poet in question. For me, poetry translation usually involves making a series of drafts until I reach a point when I’m just fiddling around with a select number of the alternatives I’ve come up with. At a certain point you feel like you’re going round in circles and then you run out of steam. You might have looked at content, metre, assonance, alliteration and rhyme and decided which to compromise on, which to prioritise. You might write six drafts over a period of five or six weeks (the longer the better). Deadlines and the limits of one’s own mental capacities and linguistic repertoire call a stop to the process.

Attending a workshop with other professional translators offers a completely different experience. We compare the myriad drafts. We analyse the original as never before. Confronted with an array of solutions for a difficult line, we are shown solutions to linguistic problems some of us might not even have spotted in the original – or the translation, for that matter. It’s a stimulating, exhausting exercise. Unthinkable weaknesses in one’s own work are put in the spotlight, silly mistakes or misreadings read out loud. Some people defend their own versions quite passionately. Others, like me, sit there crossing out bits of their drafts. Not there yet, more work to be done. 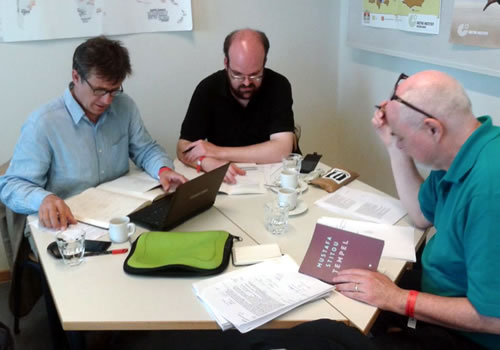 After the first day we are given the chance to revise the translations we prepared in the run-up to the workshop. It’s a strange situation: new solutions and approaches have cropped up that might never have occurred to my translating brain. Should I steal them? It doesn’t feel like my work, my voice – even though, ironically enough, what I’m trying to do is capture someone else’s voice, the poet’s. I realise in the end that I want to provide my own ‘version of events’. I only want to adopt words or phrases that I might realistically have come up with myself, not ones I might adore but that are clearly someone else’s. The temptation to behave like a magpie feels wrong, inauthentic, cheating, not like winning the game at all. Is that a good or a bad thing? How much ego should a translator have? How much does the necessary coherence of voice in a translation depend on that ego?

The matter is put to the test when the translators begin working on new translations in small groups. My teammates are Jonathan Reeder and David McKay, peers whose work I know and admire. Collaborating on group translations proves a process of surprisingly little resistance. Three minds speed things up and make for faster potential solutions and more of them. Now I’m happy to jump on board some excellent turns of phrase I may not have come up with on my own. I’m also pleased with the end results and feel much more confident about these joint drafts than I did about my own. But do these group versions have a coherent voice? My personal feeling is they do. David Colmer, the moderator, proposes that by nature joint translations take fewer liberties, though, since liberties are always taken in the context of a one-man translation as a whole. One man making up for shortcomings, or one man daring to push out the boat, I wonder? I need to think about this some more.

How much ego should a translator have?