Between mid-November and mid-December, a presentation of Dutch children’s and youth culture called Ton monde, plein de merveilles took place in Montreuil, a suburb of Paris. This multidisciplinary collaboration between Dutch foundations, French partners and the Dutch embassy in Paris consisted of screenings of Dutch children’s films, dance and theatre performances and, of course, literary activities. 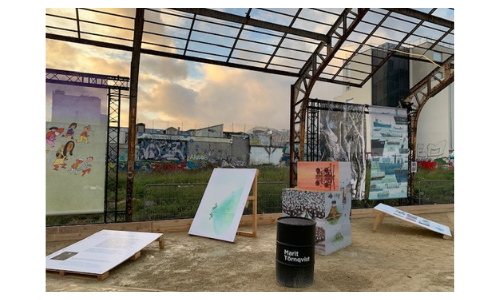 This book fair, which is open to the public, is packed with classes of children on schooldays. Fortunately, after a year in which the fair had to go completely online, it was able to take place physically again. There were more stands than ever: 400 publishers presented their titles. And many, many children were present again this year. It felt festive and nerve-wracking at the same time, especially since the contrast with the Dutch Covid measures was so great. In the Netherlands, everyone was firmly advised to work from home and there was an evening lockdown from 5 p.m. In Paris, everything was open and a book fair was taking place as though nothing was wrong. At least, aside from the masks and the thorough checks of everyone’s passe sanitaire. But the energy was palpable through the nose and mouth coverings, and it was a pleasure to admire and discuss many beautiful books.

The fair’s entrance was spectacularly lined with an exhibition of work by eight illustrators, including Marit Törnqvist. It was impressive to see illustrations from Het gelukkige eiland (La Joie de Lire, translation Maurice Lomré) among the large blow-ups in this industrial setting. After the fair, the exhibition with work by four French and four international artists will travel to 300 libraries across France. 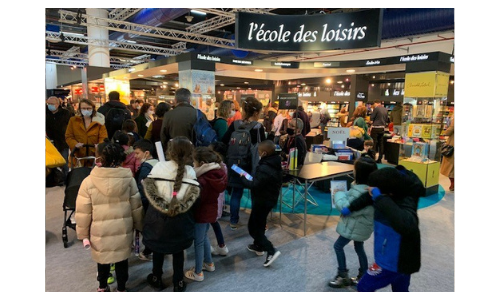 A conversation between Anna Woltz and Susie Morgenstern took place on Wednesday 1st December at 9.30 am, as one of the first of the 250 live events of the fair. And in the afternoon, there were signing sessions with both authors on their publisher’s stands. Anna was mainly there to promote the recently-published translation of Alaska (Bayard, translation Emmanuèle Sandron), but a few days earlier, on Sunday 28th November, she had also put in an appearance via a video message in Cinéma Le Méliès at the screening Steven Wouterlood’s film version of her book Mijn bijzonder rare week met Tess. The translation of the novel, Ma folle semaine avec Tess, also by Emmanuèle Sandron, had already been published by Bayard Jeunesse.

On Wednesday morning, a number of picture books by Noëlle Smit were presented to a group of children between 4 and 8 years old in a library branch around the corner from the fair. Unfortunately Noëlle was unable to attend herself, but her agent Kajsa Blomberg and I read to the children, who worked in great concentration on the colouring page of In de tuin and drew a dachshund after watching Noëlle’s demonstration video. Not only this was touching, but also the fact that in the rest of the small library children were completely absorbed in the books that were being read to them or that they were reading themselves. In the afternoon, this workshop was repeated in another library branch, this time with the enthusiastic interpreter Marie Caroline van Seggelen, who skilfully drew the children into Noelle’s books. 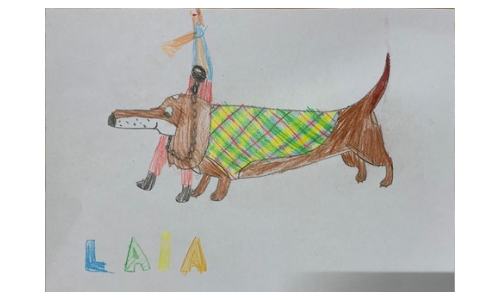 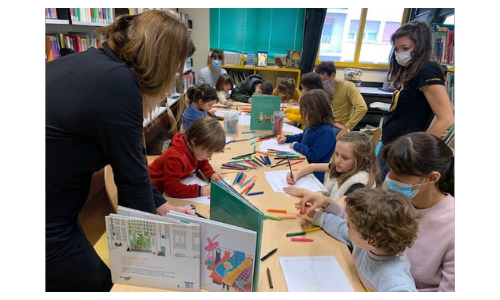 Marit Törnqvist was present at the fair on Saturday 4th December for an interesting conversation with the seven other illustrators from the exhibition, which was attended by a large audience. She also signed La joie de lire on her French/Swiss publisher’s stand.

The wholly virtual edition of the fair in 2020 had proved that an audience of more than 500,000 children could be reached via La Télé du Salon on French television and digital blackboards in schools. This year, too, part of the fair could be followed online. This included short videos about recent translations by Dutch authors and illustrators, including Jeannot & Jeannette, the first translation into French of Jip & Janneke by Annie MG Schmidt and Fiep Westendorp (Format, translation Emmanuèle Sandron). 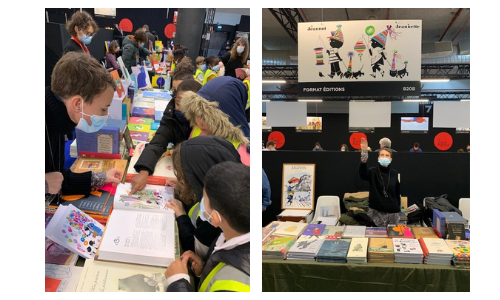 After not attending a book fair for more than 18 months and with some uncertainty as to whether the spring fairs in Bologna, London and Leipzig will be able to take place, it felt like a real gift to experience this personal contact with books and book lovers again. I hope to do so again soon!

It felt like a real gift to experience this personal contact with books and book lovers again!

All weblogs by Agnes Vogt