What can you learn about the Netherlands through Dutch children’s books? Etsuko Nozaka, translator Dutch-Japanese, sees the Netherlands as a country with a great emphasis on freedom and individual rights. What kind of children’s books does that yield? In this blog, originally published by Ehon Navi, with more than 20 million readers one of the largest Japanese websites on childrens literature, addresses this question by zooming in on books by three Dutch authors: Anna Woltz, Els Pelgrom and Dick Bruna. 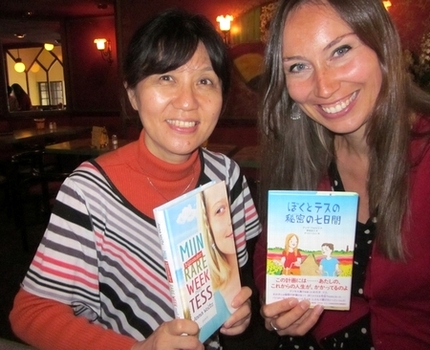 As soon as I read Mijn bijzonder rare week met Tess (My Extraordinary Week with Tess) by Anna Woltz, I knew I wanted to translate it. The story is set on Texel Island on the northwestern coast of the Netherlands and portrays 10-year old Samuel, his encounter with the ‘strange’ girl Tess, his experiences of being alone, and the meaning of family. You may have seen the movie: it opened in Japan in 2020 under the title Kyōryū ga oshiete kureta koto (‘What the Dinosaur Taught Me’) and received awards at many filmfestivals, including the New York International Children’s Film Festival. 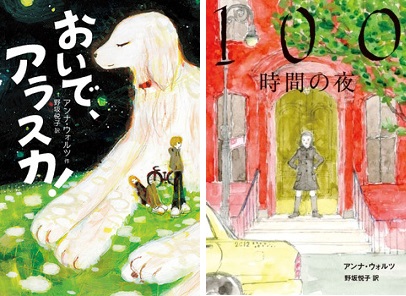 Covers of the Japanese translations of Alaska and Honderd uur nacht.

Alaska (Talking to Alaska), my second translation of a youth novel by Anna Woltz, deals with heavy topics such as epilepsy and what happens when a family becomes the victim of a crime. Tension-filled scenes of the confrontation between the protagonists over the dog Alaska unfold in a bracing style. Again here, as Woltz usually does, the focus is not on the adults but the story is told from the perspective of the children themselves. The conversation between the two teenage protagonists is realistic and evocative, revealing something new with every reading. While translating, I realized this is also a very good book to know more about the subject of epilepsy.

In the youth novel Honderd uur nacht (The 100-hour Night), fourteen-year-old Emilia is no longer able to endure the scandal involving her father and the online slander that ensues, and escapes to New York. It is a story that portrays what it is like for a teenager living in the new internet-connected world. The exposure of private affairs on the internet is a traumatic event, and for young people accustomed to the conveniences of today’s world what happens when a powerful hurricane knocks out water and power supply in the big city for five days makes for high adventure.

Anna Woltz has visited Texel Island as well as New York City, and she skillfully weaves events she has actually experienced into stories for today’s children.

I believe her works transmit to us the “now” of Dutch children’s literature.

The Diary of Anne Frank is famous for its record of World War II in the Netherlands, but the novel De kinderen van het Achtste Woud (The winter when time was frozen) by Els Pelgrom is also a masterpiece, portraying people who tried to preserve the routines of daily life even as the war around them intensified. The story is vividly told through the eyes of 12-year old Noortje, who has evacuated with her father to a farm in the countryside. This story is based on the author’s own experiences.

This translation was an arduous but valuable experience. It was the first time I had ever attempted such a long work. I also had to render life in an era of history and in the Dutch countryside, both unfamiliar to me, into Japanese. It took me five years, but I gradually figured it out, translating a little at a time. Wanting to understand life at that time, I visited the Netherlands Open Air Museum in Arnhem over and over, learning about old farm tools and the way the farmhouses were built. In 1996 author Els Pelgrom kindly drove me around the Veluwe region where the story is set. I was thrilled to see the wild landscape covered with the purplish-red of flowering heath. She kindly pointed out to me a hill: “There, that’s the hill Evert and I sledded down together.” 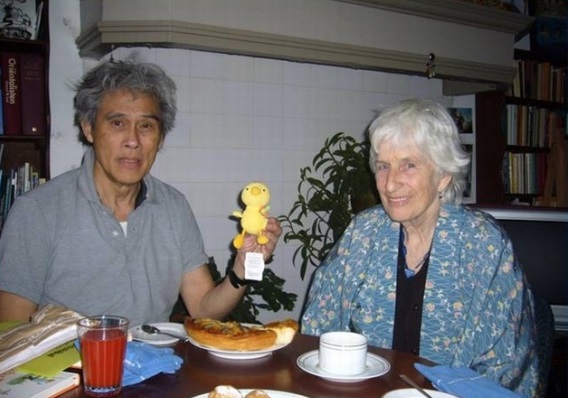 Els Pelgrom (right) together with Thé Tjong-Khing, who illustrated many of Pelgrom’s books, amongst which Kleine Sofie en Lange Wapper.

Pelgrom received the Gouden Griffel (Golden Slate Pencil) for the first time in 1978 for De kinderen van het achtste woud, second in 1985 for Kleine Sofie en Lange Wapper, and third in 1990 for De eikelvreters. I am now in the midst of translating this third award-winning novel as Donguri-kui (‘The Acorn Eaters’). The story, set in post-civil war Spain, is from the boyhood of Pelgrom’s ex-husband. It depicts how the cheerful Andalusian people maintain their pride despite social injustice and the appalling gap between rich and poor. I look forward to bringing this story to Japanese readers next year. 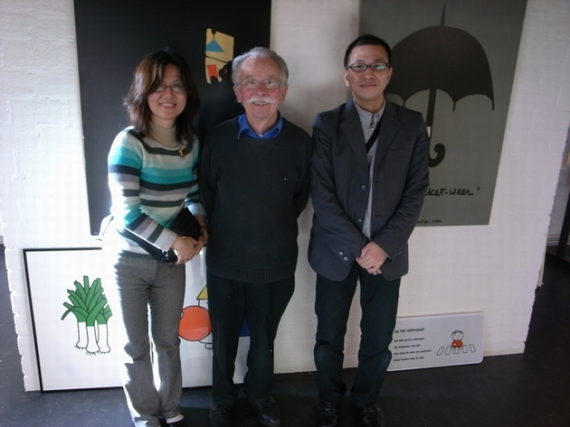 Etsuko Nozaka, Dick Bruna (middle) and Kuniyasu Yamaguchi, who works for the Sankei paper, in 2009.

The little rabbit Miffy picture books by writer and illustrator Dick Bruna introduce to us various Dutch customs. For example, we see how, in Miffy and the New Baby, a sibling brings cakes to school to celebrate the birth with everyone.

In the Netherlands, when a baby is born, it is customary to hand out a snack called “beschuit met muisjes”, a round, crunchy rusk covered with sugar-coated aniseeds. There are various theories as to the origin of the name. Muisjes means “mice”, which used to be a symbol of fertility, and the sugar-coated aniseseeds resemble many little mice.

Miffy’s Birthday is another favorite full of celebration and love. When a person has a special occasion such as a birthday in the Netherlands, instead of waiting for others to give their congratulations, he or she initiates the celebration, bringing something to share and inviting everyone to celebrate together. I always think it is delightful to see people handing out cakes at school or workplace on their birthday. Birthdays are very important days, even for adults. Another way of marking birthdays is giving presents to the person celebrating his or her birthday.

Miffy’s Bicycle centers around the bicycle, an indispensable means of transportation in the Netherlands. One of the pleasures of Bruna’s books is how they allow us to imagine—such as through Miffy’s longing for a bicycle—the fabric of life in the Netherlands.

Cultural Differences between Japan and the Netherlands

Of course, I am not claiming all is ideal in the Netherlands today; like many other places in the world, the Netherlands faces issues of discrimination and inequity. But historically, it has been a country of tolerance for new ideas and religious beliefs; individual freedom is of utmost importance. The fact that it was the first country in the world to legally recognize same-sex marriage and euthanasia, is rooted in this tradition that prizes the individual’s right of choice above all.

As Japanese children grow up, they learn how to read the mood of a situation and modify their behavior; they are less likely to assert their own opinions. Theirs is a society that values consensus and compromise; it is quite different from a society where “individual choice is of utmost importance.” Still, I think these differences teach us the importance of patiently transmitting ideas through stories. Stories can teach such things before children’s minds are molded to the convenience of adult society—before they find they have no place to escape to, resign themselves to powerlessness, and lapse into apathy. What is important is to keep asking children, “What do you want to do?” and to keep reminding them that “You have the power to shape the future that you want.” As adults, what we can do is to listen to what children hope for and think with them how to make those dreams come true. What I want to do is to search out Dutch children’s books that carry these messages and keep on translating them into Japanese one by one.

This is an excerpt from a longer article by Etsuko Nozaka (text and photos), originally published in two parts on Ehon Navi, one of the largest Japanese websites on childrens literature. Translation from the Japanese by Lynne E. Riggs.

All weblogs by Etsuko Nozaka

See all weblogs by Etsuko Nozaka