International Booker Prize for The Discomfort of Evening

For the first time ever, a Dutch novel has been awared the International Booker Prize. The Discomfort of Evening (Faber & Faber) by author Marieke Lucas Rijneveld and translator Michele Hutchison has won this prestigious award. Rijneveld is not only the first Dutch author to be awarded this honour but also the first debut novelist and the youngest author ever to receive the International Booker Prize. The foreign rights to their novel have been sold to 21 countries, so far.

The International Booker Prize winner 2020 was announced via a live stream on Wednesday, August 26. The jury chose The Discomfort of Evening from a selection of 124 books translated from 30 different languages. Chairman Ted Hodgkinson noted that while the entire shortlist was exceptional, the jury was unanimous in its praise for Rijneveld’s and Hutchison’s “visceral and virtuosic” novel:

Through pungent comedy and the sheer poetry of its perceptions, Marieke Lucas Rijneveld’s The Discomfort of Evening is a work of spellbinding beauty, translated with truly breathtaking sensitivity by Michele Hutchison. […] In truth, this book astounded us all when we first enountered it in the judging process and our fascination has only deepened on a second and third reading.”

Besides The Discomfort of Evening the shortlist was made up of the following novels: The Enlightenment of the Greengage Tree by Shokoofeh Azar (Farsi-Iran) and an anonymous translator (Europa Editions), The Adventures of China Iron by Gabriela Cabezón Cámara (Spanish-Argentina), translated by Iona Macintyre and Fiona Mackintosh (Charco Press), Tyll by Daniel Kehlmann (German-Germany), translated by Ross Benjamin (Quercus), Hurricane Season by Fernanda Melchor (Spanish-Mexico), translated by Sophie Hughes (Fitzcarraldo Editions), and The Memory Police by Yoko Ogawa (Japanese-Japan), translated by Stephen Snyder (Harvill Secker).

In her response to winning the award, Hutchison called on readers to broaden their horizons by reading more translated literature:

Translations open up windows onto other worlds, allowing us to see into other places and other people’s minds. Now, when it is no longer possible to travel like we used to, we should travel by reading books. Each of the books on the shortlist deserved to win, so please don’t only read The Discomfort of Evening; read them all.

In a radiointerview, Rijneveld praised Hutchison’s work: ‘It was a bit odd to hand it over, but she really stayed very close to the story. The poetry of the book, the rhythm; for a translator that is of course important to preserve. Michele did that very well. ’ Rijneveld further commented on their win by stating they were ‘as proud as a cow with seven udders’. 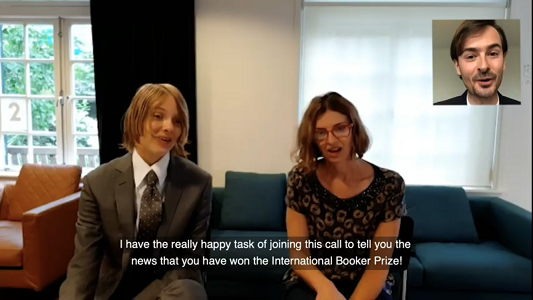 The Discomfort of Evening

The Discomfort of Evening takes the reader to a family farm on the Dutch countryside, where main character Jas is mourning her dead brother and dreams of ‘the other side’ and of redemption. Rijneveld forces us to look at exactly what is seen, felt and tasted, not from a distancing helicopter perspective, but from close up, breathtakingly close up.

Marieke Lucas Rijneveld (b. 1991) made her debut as a poet in 2015 with Kalfsvlies (Calf’s Caul), which won the C. Buddingh’ Prize for the best poetry debut. Their second collection of poetry, Fantoommerrie, was published in 2019, also by Atlas Contact. Their debut novel will be published in more than 20 languages worldwide. Almost simultaneously with the Booker announcement, the U.S.-edition of The Discomfort of Evening has been released by Graywolf Press.

The International Booker Prize is awarded annually to a book published in English translation in the United Kingdom or Ireland. The prize recognizes both the writer and the translator; they share the monetary award (£ 50,000). Harry Mulisch, Stefan Hertmans and Tommy Wieringa were previously longlisted for the prize; the shortlist nomination and the winnings of The Discomfort of Evening are a first in Dutch literature.

There has been a growing interest in Dutch literature in all its variety in the UK for some time now. With the high-profile campaign New Dutch Writing, the Foundation for Literature supports and nurtures this trend. Recent successes include Tonke Dragt’s youth novel Letter for the King (translated by Laura Watkinson for Pushkin Press), which was also released as a Netflix Original this year; The Evenings by Gerard Reve, a modern classic translated by Sam Garrett; Rutger Bregman’s non-fiction book Humankind. A Hopeful History (translated by Elizabeth Manton and Erica Moore for Bloomsbury) was greeted with wide critical acclaim earlier this year; Tommy Wieringa’s succes with the 2019 Int. Booker longlist nomination for The Death of Murat Idrissi was prolonged by the publication of his novel The Blessed Rita(both translated by Sam Garrett for Scribe) and Laura Watkinson was the first translator ever to be shortlisted for the Carnegie Medal this year with Lampie, the first children’s book by writer and illustrator Annet Schaap.
Eight new Dutch authors will be introduced to the English reader with Verzet, a chapbook published by Strangers Press on September 22. Furthermore, Booker Prize 2020 laureate Michele Hutchison will be the guset editor of a Asymptote special on Dutch literature this Fall.

Some reviews of The Discomfort of Evening