On a single sentence from Eva Meijer’s Bird Cottage

Bird Cottage, my translation of Eva Meijer’s Het vogelhuis, is, of course, a book about the relationship between humans and birds, and by extension with the whole of the natural world, but it is far from being a sentimental story about an eccentric lady and her almost tame garden birds.

The novel is about the relationship the protagonist has with the natural world and is a fictional imagining of the life of Len Howard, whose significance the Dutch author Eva Meijer has understood and recovered. Gwendolen Howard was born in 1894 and died in 1973. As a middle-class Englishwoman of that era she might have been expected to lead a life primarily as a wife and mother. Yet the paths she trod were quite different, first leading her to a bohemian existence in London as a musician, and then at the height of her career to a retreat from that life, to start again in the countryside and study birds. That decision eventually created relationships of extraordinary intimacy between Len and the birds that visited her garden, so that soon she was able to perceive many of them as individuals and recognize the particular nature of their intelligence. A number of the birds became Howard’s housemates, roosting in her bedroom at night, and flying freely in and out of her cottage. One bird – a Great Tit called Star – became adept at recognizing and tapping out numbers and was featured in the books and articles that Howard wrote about her discoveries. 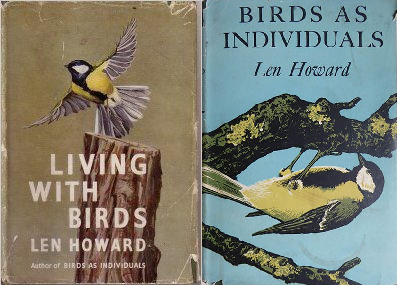 It’s clear that in the 1940s and 1950s Howard’s studies were well-known, and well-received, in the UK and in many other countries, yet the scientific world found her work less convincing, largely because animal studies were then dominated by behaviourist theories, and by a conviction that experimental replicability was essential if the work was to be regarded as science. Howard was studying birds in a natural environment and her work was antithetical to such approaches. Another factor must have been Howard’s status as a supposedly untrained and scientifically naïve woman, who was actually trained and educated to the highest of standards in the field of music.

Music and birds are linked not only through sound, but also through time and rhythm. There is a really beautiful and significant passage in Bird Cottage, when Len is playing violin in the orchestra, which highlights these links. We are in Len’s mind as she experiences and participates in the piece being performed. It’s like a landscape, Len tells us, first grass, and then water, a river and the sea; and as her mind moves with the music, you can feel her flying above this landscape, until the whole world and everything that exists is in view:

… and when you come down again it’s clear that it’s all endlessly intricate and detailed and complex, far more than you thought, and that what is in the smallest things is also in the largest: you’re here now, you’ve been everywhere and you’ve never left your spot. Playing is like flying: the altitude, speed, lightness, the confidence that the magic will endure, that the magic can be trusted, for as long as it lasts.

That delighted perception – and delight in perception – is something I also feel in the sentence I have chosen to represent this book: “The birds show me that time is not the straight line that humans make of it.” Time is not a straight line, but is experienced differently by all living things, and by ourselves too at different points of our lives. The small creatures with whom we share this world have the shortest of lives: the Great Tits and other birds that Len Howard studied have an average life-span of around 2 to 3 years, perhaps 5 years at the most, but those lives are lived to the full within constant patterns of repetition, change and adaptation.

It is very difficult to select a single sentence to represent a whole book, but the one I have chosen really is a kernel from which many other aspects of the book grow. It is simple and profound; it is lyrical and responsive. It catches the way in which Meijer shows that Len Howard values the lives of her individual birds just as much as those of human beings, as her own life. It demonstrates to the reader how it is possible to give importance to creatures other than ourselves; how we can live in harmony with our whole environment. That isn’t at all sentimental, but challenging – and that is perhaps why English-speaking readers forgot about the significance of Howard’s work, as our disharmony with that environment increased.

Len Howard, in Meijer’s characterization of her, is not even sentimental about death, and that specific lack of sentiment is also directly linked to the insights into time that the birds grant her. Star, her favourite bird, may die, but, as Len points out: ‘things don’t come to an end, they just change form’; and more profoundly still: ‘This is how times intermingle; this is how we exist in different moments all at once.’ Len Howard’s actual life was just as much a flash in time as a bird’s life is, as our own lives are, but those lives and their significance are not lost when our bodies pass into some other form, when our thoughts and feelings pass into another consciousness, when our words and perceptions pass into another language:

The birds show me that time is not the straight line that humans make of it.

The same thinking that informs this sentence also informs the shape of the book – not one with a conventional plot-line, with a sharp beginning, middle and end, but a series of pinpricks of consciousness that interlayer time. Len’s individual consciousness fades out toward the end of the book on an everyday but deeply moving thought about buying cheese for the birds, her last thought as a living person, but then her voice circles back to life again as we share the joyful observation of her younger self watching the fleeting, beautiful, beloved forms of two individual birds:

… there they go, higher and higher into the air, ever higher, ever swifter.

Bird Cottage (Pushkin Press, 2018) is a translation by Antoinette Fawcett of Eva Meijer’s Het vogelhuis (2016), which in its turn was inspired by the work of Len Howard, in particular by Birds as Individuals (1952) and Living with Birds (1956).

… there they go, higher and higher into the air, ever higher, ever swifter. And so do we.

All weblogs by Antoinette Fawcett

Antoinette Fawcett is a translator from Dutch, a language which she learned as a child from her Dutch mother and has recovered as an adult. After a career teaching English and world literature in the UK and several other countries, she returned to university to study for an M.A. and then a Ph.D. in literary translation. Bird Cottage, a translation of Eva Meijer’s Het vogelhuis, is her first full-length translation and has won her a nomination for the Vondel Translation Prize 2020.

See all weblogs by Antoinette Fawcett