Toine Heijmans, Niña Weijers, Inge Schilperoord, Adriaan van Dis and Saskia Goldschmidt will participate in the Rencontres Littéraires Internationales of the MEETING festival in St. Nazaire and Paris from 21 to 28 November.

The theme of the festival is "Comment ça commence" (How it begins), about the beginning of a writer's career. At the invitation of the festival, the five authors each wrote a text that is collected in a special publication of the festival. The five Dutch authors will perform at the Maison de la Poésie in Paris on 26 November.

Toine Heijmans (b. 1969) is a journalist for de Volkskrant. After writing the non-fiction book La Vie Vinex (2007), he made his mark with his debut novel Op Zee (At Sea, 2011). The book was lauded by reviewers and booksellers alike, and has been translated into German, French, Danish and Hungarian. The French translation was honoured with the Prix Médicis étranger in 2013.

Niña Weijers' debut novel The consequences (De consequenties) was published in May 2014. It won the Anton Wachter Prize 2014 for best first novel, the Opzij Prize, the Lucy B. & C.W. van der Hoogt Prize, and was shortlisted for the Libris Prize and the Gouden Boekenuil, the two most important Dutch and Flemish literary awards. So far, it sold over 25.000 copies. It has been translated into Czech, English, French and German and is currently being translated into Macedonian and Polish. Her second novel Rooms, Anterooms (Kamers Antikamers) was published in the summer of 2019, and nominated for the BookSpot Literature Prize.

Inge Schilperoord (b. 1973) works as a forensic psychologist and has published articles in NRC Handelsblad, Psychologie Magazine and Crossing Border Magazine. The novel received the jury award of De Bronzen Uil for the best Dutch debut. It has also been longlisted for the ECI Literature Prize. It has been translated into Catalan, English, French, Italian, Norwegian, Spanish and Turkish.

Adriaan van Dis (b. 1946) debuted in 1983 with the novella Nathan Sid. After making a name for himself as a travel writer with books such as Het beloofde land (The Promised Land) and In Afrika (In Africa), he sealed his reputation with the award-win­ning bestseller Indische duinen (My Father’s War, 1994), a novel about the Dutch-born son of an Indonesian family who grows up in an atmosphere of repressed suffering. His later novels such as Familieziek (Family Fray, 2004), De wandelaar (The Walker, 2007) and Tikkop (Betrayal, 2010) have all sold well and received glowing reviews. His work has been translated into many languages.

Saskia Goldschmidt (Amsterdam, 1954) worked as a youth theatre producer and trainer of hospital staff and debuted in 2009 with Verplicht gelukkig (Compulsory Happiness), an autobiographical non-fiction book about growing up in the shadow of the Holocaust. The success of her debut and the discovery of documents about the rise of the pharmaceutical giant Organon (producers of the contraceptive pill), prompted her to write this novel. The Hormone Factory was an instant success in the Netherlands and rights have already been sold to Germany, Israel and the United States. 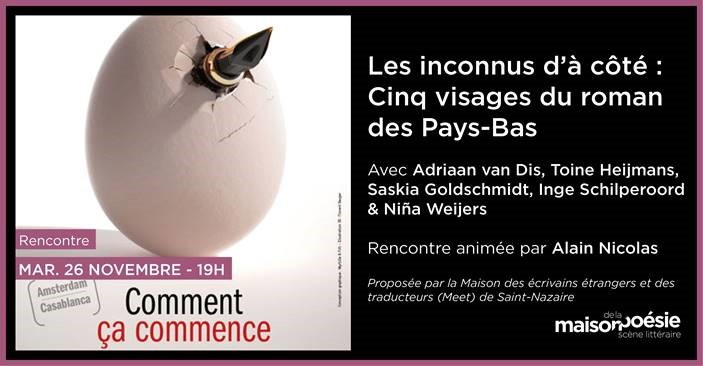