On 14 February, Dutch authors Niña Weijers and Sytske van Koeveringe will meet with their Belgian and French colleagues Charlotte van den Broeck, Julia Deck and Arnaud Cathrine. Central theme of the evening is ‘La nouvelle génération comment vivre dans le monde d’aujourd’hui?’. The evening will take place at the Atelier Néerlandais in Paris and will be moderated by Julien Bisson, journalist from Le1. 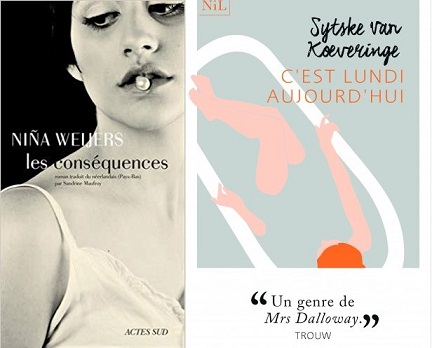 In her first novel Niña Weijers shows what she is capable of: a portrayal of the fashionable world of modern art, a coming-of-age story about a talented girl capable of many things but unsure of everything, and a tense story about disappearing. One of the most striking débuts of recent years.

Julia cleans other people’s homes. Occasionally she meets their owners, most of the time she’s there alone. There is a flopped debut, there is an ex, there is a Yogaman who’s actually a dog whisperer, there are housemates, burn-outs, there is a craving for Marléne, there are expectations… And there is a Julia who sleeps poorly and gradually takes possession of the bath in house number 61, the living room in 122-D, eats her way through fridges and drinks rosé on the rooftop terrace that’s not hers…

The programme is part of the Les Phares du Nord campaign, an intensive campaign aimed at presenting Dutch literature in France, the second largest book market of Europe and the fifth worldwide. During the campaign over 100 Dutch and Flemish authors will present themselves at more than twenty literary festivals throughout France in 2018-2019.